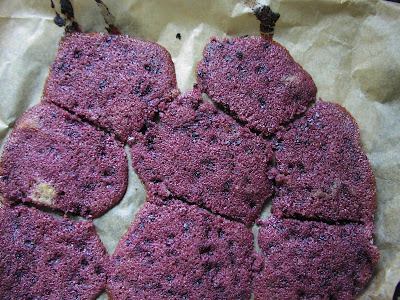 My recent attempt at creating a magical recipe for Lammas was not a success.

Lammas, the pagan festival for the start of the harvest celebrated on August 1, this year occurs at around the time of the new moon. So, I thought it would be a wonderful idea to bake some blackberry biscuits - round like the shape of the moon, but dark purple like the moonless midnight sky and made with the blackberries that have just ripened in my garden.

I couldn't find a specific recipe for blackberry biscuits, but I did find an American recipe for raspberry cookies, which I tried to adapt, converting cups to ounces for measurement and substituting squished blackberries for pureed raspberries.

Only something went wrong - and what should have been crisp, round biscuits merged into a sort of big, flat, blackberry pancake! I think I've worked out my mistake - I dolloped too much mixture on the baking sheet for each biccie, didn't space them out enough and then didn't leave them in the oven for quite enough time.

Oh well, they tasted nice even if they were more purple splodges than biscuits.

aww, Bad, they look so gorgeously fruity my mouth is watering! Why not use the 'Lammas lasts till 6th August' card and try another batch? Us Witches need our cookies to satisfy our sweet tooth.....

I'm writing to you because I am an editor at Before It's News. Our site is a People Powered news platform with over

2,500,000 visits a month and growing fast. We would be honored if we could republish your blog RSS feed

(http://www.badwitch.co.uk/feeds/posts/default) in our spirituality category. I am striving to further educate our readers about

Witchcraft, Wicca and other pagan religions and your site/blog would certainly help us accomplish this.

Syndicating to Before It's News is a terrific way to spread the word and grow your audience. Many other

organizations are using Before It's News to do just that. We can have your feed up and running in 24 hours. I just

need you to reply with your permission to do so. Also, please let me know if you have any other related blogs that

we should check out.

every story from your feed. If you're interested in this, please email me the text and/or URL that you would like us

Please let me know if you have any questions. I look forward to hearing back from you!

i for got to give you my e-mail, e-mail me at coffinman82@aol.com, thank you, blessed be and merry lammas to you :)

Live and learn my sister. Blessed Lammas to you and yours.

Oh no! Well, nice color, I have to say. I celebrated with some tasty "blueberry treats"--but I didn't bake them myself (thank heaven for the local bakery!).

Were you using all-purpose flour? If so, you might try substituting bread flour for a portion of it. The bread flour has more gluten, and so the biscuits will hold their shape more readily.

Thanks for the suggestion of using bread flour - I'll try that.