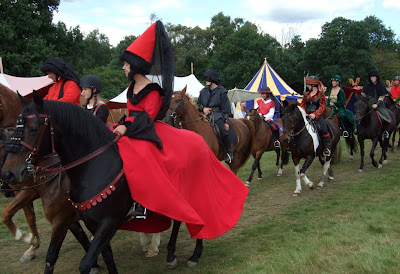 Over the August Bank Holiday weekend, pretty much every stately home and castle in England puts on some sort of historically themed fair or festival. It seems that late summer sunshine and nostalgia go together like fish and chips or strawberries and cream.

Maybe that's the reason I've been to quite a few medieval fairs over the years - to enjoy the end of the season's warm weather, sipping some real ale or cider while enjoying such spectacles as bold knights tilting their lances and buxom wenches demonstrating traditional country skills. This bank holiday, rather on the spur of the moment, I decided to go to the event at Herstmonceux Castle in Sussex - England's Medieval Festival as it is called. Before going in, I wondered if that name was a bit overly pompous - rather implying it was the best the country had to offer. But, once inside, I quickly decided it might just be worthy of the title.

The first thing I saw as I entered was a huge tournament arena where displays of jousting were taking place. This was surrounded by a sea of stalls offering all sorts of intriguing wares, vendors selling olde worlde food and drink such as hog roasts and mead, and camps of re-enactors showing how life was lived in days of yore - all in the grounds of the rather magnificent Herstmonceux castle with its moat, turrets and battlements.

The entertainment to watch included a siege of the castle, contests of medieval martial prowess, displays of falconry, music and dancing.
There was also plenty to interest pagans.
One of the first stalls that caught my eye was one selling gorgeous jewellery by Gallardo & Blaine Designs, along with information on the magical properties of the stones. I was very tempted by a magnificent moonstone pendant, but unfortunately didn't have quite enough money on me on the day. Perhaps the best thing about living in the modern age rather than in medieval times is the fact that we have websites and online shopping, so I took down the details and may well pay a visit to http://www.gallardoblainedesigns.co.uk/ when I next feel flush with dosh.
I next spent a little time chatting to a nice man who runs Pagan Archive, which has published a beautifully bound and illustrated book called The Magic Songs of the Finns. This has the reputation of being the biggest collection of Finnish folk magic and is one I will definitely put it on my wishlist. You can find out more about it, and other Pagan Archive publications, on the website: http://www.paganarchive.com/PublishedService Sheltering from a brief rain shower in the apothecary tent, I had a long chat with herbalist Jayne Milner, who trades quite appropriately as The Wise Woman.
I bought some mugwort, to help with divination, and learnt some useful tips to help stop my eyesight from deteriorating. Jayne Milner has a website at http://www.jaynemilner.com/ 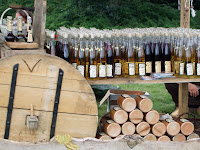 After sampling some ethical sweets and some Magic Mead, I then bumped into an old acquaintance, visionary artist Cilla Conway, who was doing tarot readings using her own lovely decks - The Devas of Creation and Intuitive Tarot.

If you want to see Cilla's art, she has two websites at http://www.devasofcreation.com/ and http://www.theintuitivetarot.com. Cilla will also be at Witchfest, in Croydon, this autumn.
I had a really enjoyable time at Herstmonceux's medieval festival. It might have been the first time I went there, but it certainly won't be the last. You can find out more about the event at http://englandsmedievalfestival.com/
Photos (from top): The grand parade; children playing knights and damsels; living history display; the tourney; the apothecary stall; the mead stall; the Eastbourne Giants dance to the sound of the Pentacle Drummers outside Herstmonceux Castle. 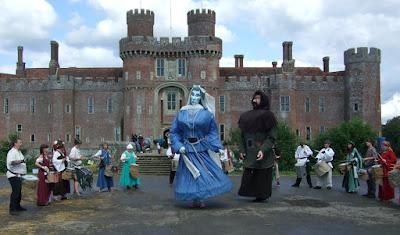 I read your blog now and then and it was fun meeting you at the fair. What a small world :D

It really was a nice festival, i'm definitely coming again next year. Should have 2-4 more books ready by then. I'm also looking into producing some historically based amulets.

That sounds amazing. I have been to Renaissance fairs here in the states, but nothing as wonderful as that. And our Ren Fairs are horribly historically inaccurate. I hope to one day be in England and I hope to be able to enjoy all the wonderful things you talk about on your blog.

So glad you enjoyed it :) We go every year and it is such a treat for us to be out and about in the country! I have posted about this festival as well :)

Intuition provides help downloading the ideas
most often not present to our senses. Call it a still voice,
a hunch or a gut feeling - whenever it starts happening you will know it's no coincidence.!
Dowsing is a skill we can use to access the intuition working with dowsing pendulum or perhaps divining rod.
I have been using it for a quite a while and I really believe anyone will likely learn it.
Look at my blog post : pendulum dowsing