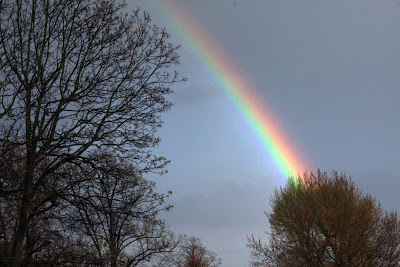 April showers are famous and we've been having quite a few of them recently. According to Ian Currie in his book Red Sky at Night: Weather Sayings for All Seasons,

April is also most likely month you will see a rainbow. He says that on days when you get a mixture of sunshine and sudden bursts of rain, a rainbow will often be seen towards evening.

That's certainly been true over the past week or so, when I took the photo above of a beautiful rainbow over the treetops near my house. Ian Currie explains that as the sun warms the land, thermals rise into the atmosphere and shower clouds form. He says that an evening rainbow is more likely to be a harbinger of good weather to follow than a morning rainbow. An old saying goes:


Rainbow to windward, foul falls the day
Rainbow to leeward, damp falls away.

I think that rainbows are beautiful whenever they appear, and in many traditions are signs of peace and happiness after troubled times.