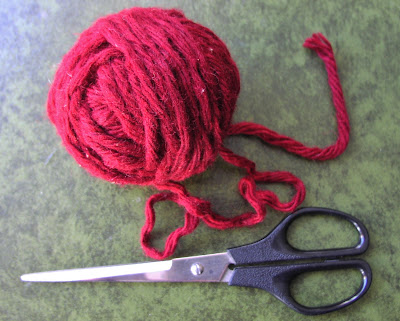 Here's a spell I came up with to help a friend who was having a lot of trouble with red tape at a bank.

This was the problem - my friend had paid their Barclaycard bill over the counter at a branch of Barclays bank, because the instructions on the back of the bill suggested the payment would be processed quickest that way even though my friend's cheque account was with a different bank. This turned out not to be the case, as my friend learnt when they got a phone call from someone at Barclaycard asking why they had not paid their bill.

It emerged that the cheque had been processed by Barclays, and the cash had gone out of my friend's bank account, but had not gone into Barclaycard's coffers. You would think that a simple bank error might be easy to sort out - but it wasn't. Despite several phone calls and visits to banks every day, the problem had not been resolved by the time my friend's next Barclaycard bill was due.

At every turn my friend faced obstructive official procedures, time-consuming bureaucracy and complete failure by anyone at any bank or customer service department to admit they had done anything wrong. It was beginning to sound like something out of a Kafka novel.

I offered to help, with this spell to cut through red tape. It is really quite simple. Get a length of red tape - or something to represent it, such as the reclaimed red wool pictured above (I'm always in favour of recycling if at all possible). Then take a pair of scissors. 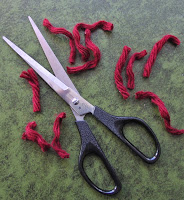 Cut a length of red tape or wool to represent the problem. Then, cut that length into little pieces while visualising each element of the bureaucratic problem being resolved. When you have finished, take the cut-up bits of tape and put them in your compost bin, or bury them in your garden, where they will rot away and provide rich soil for plants.

A few hours after I did the spell to cut through red tape, my friend phoned me to say that it seemed the problem was finally being resolved. Of course, it could have been coincidence, but I like to think my spell helped.

I like what you've done here. It's always a great feeling being able or at least trying to help a friend in need. It was wonderful to see the re-purposing of the red wool.