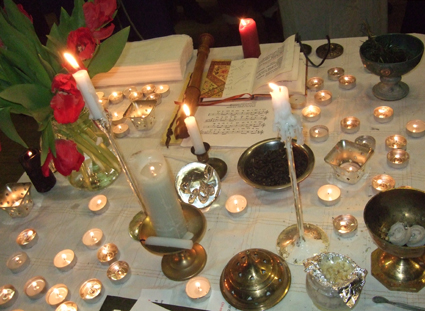 In my list of New Year resolutions, I said: "It's been years since I've made it to an open ritual run by the Pagan Federation London so in 2013 I'll make a specific point of attending at least one."

Well, last Thursday evening I went to the PF London's Imbolc open ritual at Conway Hall, Holborn.
Path of Fire, the ritual group running it, said: “We shall be working with John Dee’s ‘The Opening of the Veil’ and combining this with mindfulness walking, candles and soundscapes to effect a powerful focusing of the mind in the context of nurturing your seed of life for the coming year. The ritual will draw on both English Elizabethan and Chinese classical mystical traditions."

It sounded fascinating, so I went along.

The ritual was held in one of the side rooms at Conway Hall - an oblong room with windowless walls but a glazed ceiling through which it was just possible to see the night sky above. While we were waiting in the corridor outside someone had remarked that Conway Hall felt "a bit like a hospital," but as we filed into the room it felt like we were entering a temple. Robed ritualists purified us with salt water and incense as we passed through the doorway.

The room was dark except for the light of candles – we were each given one each to hold, then asked to form an inner and an outer circle and to move deosil in a walking meditation while repeating Enochian words as a mantra. There was an altar in the centre of the room where the ritual group used a mixture of song, chant and the Enochian words written by John Dee to open of the veil between the worlds.

As this was a rite for Imbolc, the start of spring and new beginnings, the magical intent was for each of us to plant within ourselves the seeds of our hopes and dreams so that they would grow to fruitfulness in the year ahead.

We were then asked to place our candles on the altar and then to take a few real seeds – sunflower seeds – from a bowl.

After the ritual, during the time for feasting and socialising, I heard nothing but praise for the ritual. It was unusual, beautiful, and very powerful. And I know that in me it has planted the seeds of intention to attend more PF London rituals in the year ahead.

Photography is not allowed at PF London rituals, but I was told it was OK to take the photo above of the altar after the ritual had ended.