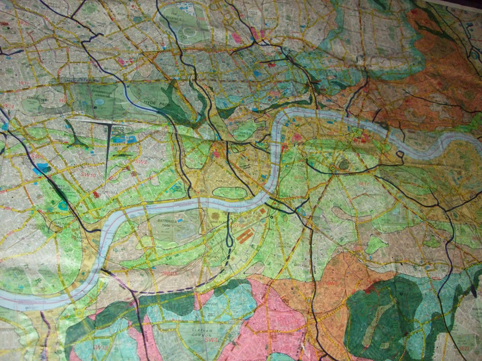 London's lost rivers, psychogeography and Forteana are topics that fascinate me, so an event last week called Lost Rivers: Uncovering the Psychogeology of London was something I didn't want to miss.

Part of a series of talks on Underground London at the Bishopsgate Institute, the evening included illustrated talks by poet Tom Chivers, author of How To Build A City,

and author Rachel Lichtenstein, whose most recent book is called Diamond Street: The Hidden World of Hatton Garden.

This was followed by a panel discussion with Matt Brown, managing editor of Londonist.com.

Tom's talk was about his explorations of London, on foot, but also through maps and online resources. He explained how he bought some printed maps of London and started colouring in their hidden geography and lost historical features with felt pens and highlighters. You can see a photo of one of his maps at the top of this page (upside down I'm afraid, silly me).

Things like the Rockingham Anomaly drew his attention. This is a peat-filled depression near Elephant and Castle that is thought to be a pingo and might once have been a small lake or marshy pool.  Obviously, it is now built over, but it has affected the landscape. Even the Romans, famous for their straight roads, diverted their route to London around it. This area has historically attracted rebels, and a psychogeographer or psychogeologist could be led to see a connection.

talked about her research into how the River Fleet had affected the lives of those who lived around Hatton Garden.

She photographed a journey she took into the Fleet, which is now used as one of London's main sewers and is almost completely below London's streets. A slideshow of this underground journey, with a voice-over by Iain Sinclair and a female geologist, showed what this subterranean world is now like.  The people who work there to keep the Victorian sewers in good repair say that descending into its brick-lined tunnels far away from the sounds of the city is like entering a fantasy world like Narnia. To me, it looked more like Neverwhere.

And the panel talk continued with a discussion of what the Fleet is like, as Tom, Rachel and Matt share the dubious honour of having walked through its murky waters. Many legends abound as to what lives there, from giant rats to albino pigs and even, once, a giant bull. Apparently, the river doesn't smell as bad as you would imagine - although you don't want to look down if you are squeemish about watching little "parcels" floating past.

Lost Rivers: Uncovering the Psychogoelogy of London took place on Wednesday 27 March. It was part of a series of events on Underground London by the Bishopsgate Institute, 230 Bishopsgate, London EC2M 4QH. For details of future events visit http://www.bishopsgate.org.uk 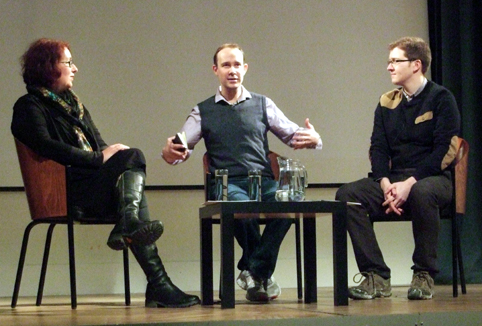 How To Build A City (Salt Modern Poets S.)