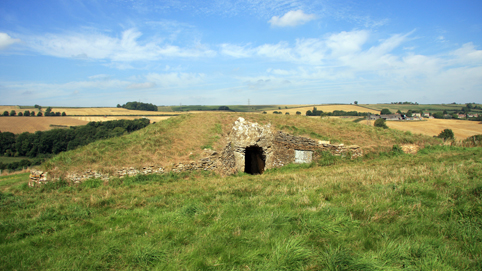 These are pictures I took of Stoney Littleton Long Barrow while I was in Somerset last week. The site is only about 9 miles from Stanton Drew Stone Circle, which I went to explore. It seemed like a great idea to also explore other ancient sites in the area while I was there.

Like Stanton Drew, the Long Barrow is managed by English Heritage. The website calls it, "One of the finest accessible examples of a Neolithic chambered tomb, with its multiple burial chambers open to view."

The entry in Wikipedia gives a bit more detail and says: "The Stoney Littleton Long Barrow (also known as Bath Tumulus and the Wellow Tumulus) is a Neolithic chambered tomb with multiple burial chambers, located near the village of Wellow, Somerset. It is an example of the Severn-Cotswold tomb.

Wikipedia also mentions that there is a fossil ammonite decorating the left-hand door jamb, which is rather beautiful. The long barrow is in a really lovely location, high on a hill overlooking the countryside. If you are into foraging for wild food, there was loads of blackberries growing on the hedges nearby when I was there last week.

I would add that the long barrow is quite a climb, but well worth it if you are moderately fit. Apparently it can get a bit muddy too, so wear suitable footwear, clothes that you don't mind getting dirty and bring a torch if you want to explore inside the tomb. You will need to crawl on your hands and knees to get to the end of the barrow, where you can just about sit without banging your head on the ceiling. 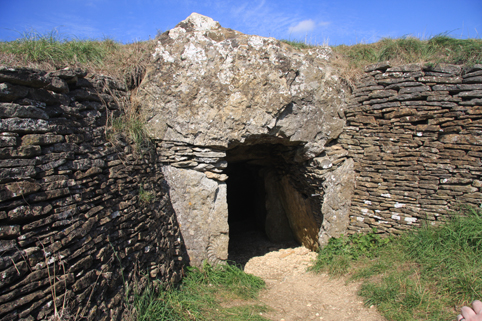