The Picture and the Past of an American Witchy Wood 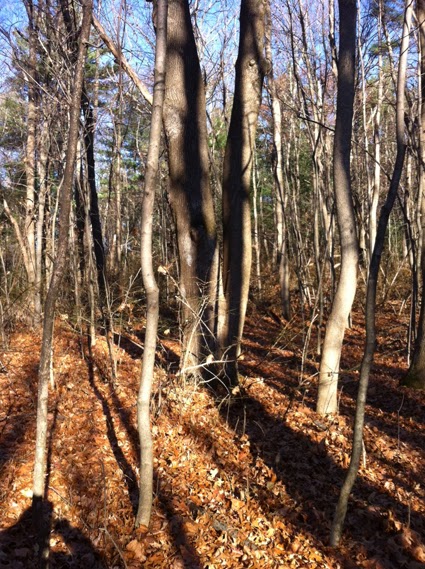 Today being the American celebration of Thanksgiving, here is a picture and a story from the USA.

Vin, who last week sent me his story of a strange experience while walking in a wood, has now taken this photograph of the wood near where he lives in America, which seems quite magical.

One reader commented: "What an intriguing story! I would love for Vin to let us see the tree in full." I said I'd like to see the whole tree too, and here it is.

When Vin sent me the photo, he said: "Here she is. Nothing remarkable." Well, I think the wood and the interesting forked tree look lovely, but I do agree that it is tough to capture the real atmosphere of a place with a camera.

Vin also said: "I’ve come to believe that land has a memory, and people from the past, present and future can ‘feel’ or even ‘access’ this memory."

He added: "That being said, here’s a connection these woods have to the Salem Witch Trials of 1692. In typical religious hypocritical fashion, all of those accused or convicted of witchcraft in the Salem Witch Trials were innocent. They were bullied into their confessions. But that’s not to say that some of them were not truly connected to something outside of our normal thinking.

"Abigail Faulkner was convicted of witchcraft in the Salem Witch Trials. She was jailed and sentenced to be hanged but was not put to death because she was pregnant. By the time the baby was born, 19 people had been convicted of being witches and were killed. After 4 months in jail she was released as the witch craze died down.

"When this baby (which arguably saved her life) was an adult he purchased and lived on this land."

Vin also took a photo of his tombstone, which you can see to the right.

I reviewed an excellent book about the history of witchcraft in America after Salem here: http://www.badwitch.co.uk/2013/02/review-america-bewitched-witchcraft.html