Story: Strange Experience While Walking in a Wood 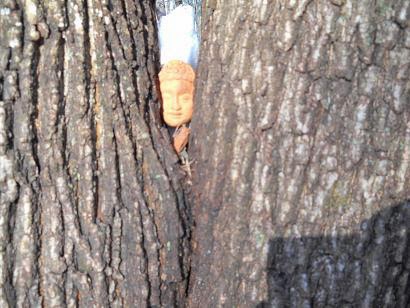 This story and the photo above were sent to me by Vin, who said he came across my blog while searching the term "witch":

There's a 200 acre tract of woods west of Boston, MA, USA which I've hiked for nearly 20 years. I hike it 2 or 3 times a week and have always gotten a strange feeling along one particular section of trail. The feeling has been so strong that I've mentioned it to a few people.

One time while hiking through this small stretch of trail I saw a person standing by a tree. I thought it was a Goth kid (dressed in all black, wearing a hood which hid his face), and I was going to acknowledge him and keep going. He was there for maybe 15 seconds, but when I got up to the tree where he had been, he was gone. He had completely vanished. In the following weeks other odd things happened at this tree including being 'tapped' on the hand once and on the back another time. After those experiences I avoided this section of trail for a long time ‘cause I was spooked, even though I’m old enough to be very skeptical.

Then months later I stopped at this tree to examine it more closely. I walked behind it and found someone had placed a clay amulet on the back of the tree. This was a shock. This is just a random tree on a random section of trail amidst many miles of trails. There is nothing obviously unique about it, but someone else must be feeling the same vibes from this tree or this section of woods. The white stuff over its head is snow.

That was over 3 years ago.

Since that time I've learned very much about paganism, witchcraft, stone circles, and how I believe this world works.

Thanks very much for emailing me that story, Vin. If you have a story or photo you would like to send me, email badwitch1234@gmail.com.

What an intriguing story! I would love for Vin t let us see the tree in full. x

I'll get out there this week and take a photo.
The woods are pretty dense and it might not be a very dramatic shot!

I love these sort of stories about how people find the pagan path and the spiritual experiences they have during their life journey.

Indeed I've often thought that someone should collate some of these experiences in people's own words and transcribe them into a book.

We have loads of great pagan books that tell us which tools to use, what days to cast spells on, etc. But I've not found one where pagans describe these spiritual experiences.

Here she is.
Nothing remarkable...!
-Vin

this is so cool!