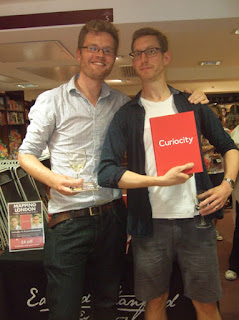 The picture to the right shows Henry Eliot and Matt Lloyd-Rose at the launch event of their new book Curiocity: In Pursuit of London at Stanfords map store in London last night.

Curiocity is a large and beautifully illustrated book based on the small, fold-out Curiocity maps of unusual things you can find in London that Henry and Matt produced a few years ago.

Each issue of their earlier map magazine had a different theme based on a letter of the alphabet, which unlike the familiar A-Z guides to London's streets featured the weird and wonderful rather than the mundane. Their new book, which is published by Particular Books - an imprint of Penguin - is very much the same kind of thing. It has lots of strange maps designed by various artists to show London re-imagined according to themes including dystopia and utopia, time travel, trade, the wyrd and even waste and sewage.

At the event at Stanfords, which was called Mapping London, Matt and Henry gave an illustrated talk about the maps and what inspired them. I have a copy of the book and I am looking forward to reading it. I'll be reviewing it on A Bad Witch's Blog in the future.

You can buy Curiocity at Stanfords, 12-14 Long Acre, Covent Garden, London WC2E 9LP or order it via Amazon. 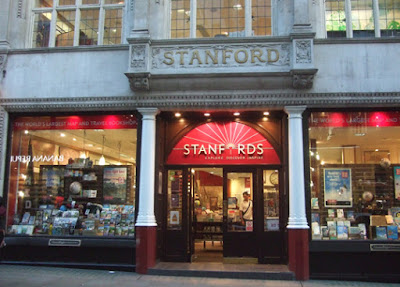