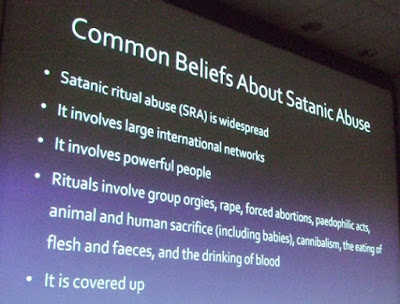 Yesterday I attended Seriously Suspicious – the Assap conference on conspiracy theories – and three of the talks were directly about the occult and witchcraft. Two of those talks were about Satanic Ritual Abuse, and that is what I am going to blog about now.

The two talks were from two seemingly opposing perspectives. Tim Tate, best-selling author of dozens of popular books about murders, sex offences and child abuse with titles including Children for the Devil (now withdrawn), Slave Girl and The Murder of Childhood, gave a talk called Satanic Ritual Abuse. This was followed by Professor Chris French of Goldsmiths’ APRU who specialises in the psychology of paranormal beliefs and experiences offering A Further Perspective on Satanic Ritual Abuse.

Now, I said that the two talks were from seemingly opposing perspectives, but actually there were a few fundamental thing both speakers appeared to agree on.

Firstly, there is no conspiracy of Satanists who are ritually abusing children and there never has been. For a conference about conspiracies, that’s the biggie. And, although neither of the speakers specifically mentioned this in their talks, I think both would completely agree that child abuse is not a normal or accepted practice of The Church of Satan.

Secondly, and this is also an important and serious point, ritual abuse of children sadly does happen. In recent years a sizable number of the child ritual abuse cases that have reached courts in the UK have been by Christian groups and individuals performing exorcisms on children involving torture and even murder. The most famous example is probably that of Victoria Climbie. Added to that, in some - thankfully extremely rare – cases, paedophiles have self-identified as Satanists and abused children in horror film-like settings. All child abuse is awful, but adding that extra level of terror is, of course, despicable.

Before I get to the area of disagreement, I’m going to talk about the background to the idea of the Satanic Ritual Abuse conspiracy – sometimes called the Satanic Panic.

In the UK, without exception, these claims were found to be untrue. Absolutely no forensic evidence was found despite very thorough searching, not even a drop of blood. Charges were also later dropped in the USA too.

This Satanic Ritual Abuse panic was actually part of a wider fear of Satanism that was prevalent in the latter part of the 20th century. The Devil’s influence was seen everywhere in pop music, films, books, TV shows, roleplaying and computer games. This was dubbed the Moral Panic, and some groups – particularly evangelical Christians – saw it as part of an international conspiracy by powerful Satanists to recruit people – especially the young - to bring an evil plot to fulfilment.

It all might seem a bit laughable now, at a time of real threats to the world. Except, of course, that the false accusations brought misery to those families accused, separated and put on trial in the modern-day witch hunts. 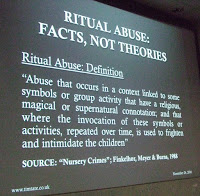 So, where did Tim Tate disagree with Professor Chris French on this issue?

Well, it is really down to the definition of Satanic Ritual Abuse.

Tim Tate uses the definition of ritual abuse taken from Nursery Crimes by Finkelhor, Meyer and Burns (1988): “Abuse that occurs in a context linked to some symbols or group activity that have a religious, supernatural or magical connotation; and that where the invocation of these symbols or activities, repeated over time, is used to frighten and intimidate the children.”

Professor Chris French quoted the definition given by Jean La Fontaine in 1994: “Rites that allegedly include the torture and sexual abuse of children and adults, forced abortion and human sacrifice, cannibalism and bestiality may be labelled as Satanic or Satanist. Their defining characteristic is that the sexual abuse of children is part of the rites to a magical or religious objective.” 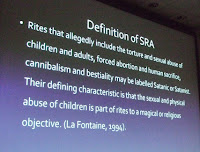 Jean La Fontaine was specifically talking about the Satanic Panic - claims of a widespread network of Satanic ritualists engaging in extreme abuse, baby-farming and infanticide. Tim Tate’s preferred definition is much more general.

Tim Tate talked about the case of Albert and Carolee Hickman, two self-identified, isolated Satanists who pleaded guilty to assaulting, raping and torturing a schoolgirl in “Hammer Horror film”-style rites. It is, of course, an awful and shocking case.

As Chris French said: “If you accept Tim’s definition of satanic ritual abuse, then yes it occurs – people using trappings of Satanism to frighten children.”

However, there is absolutely no evidence that this is the same thing as the widespread, organised Satanic sexual abuse, forced abortions, infanticide and cannibalism, fears of which led social workers to break up families in the 1980s and 90s.

Wouldn’t it just be lovely if we could all agree that abusing children is really bad, but rekindling a fake moral panic isn’t that helpful either.