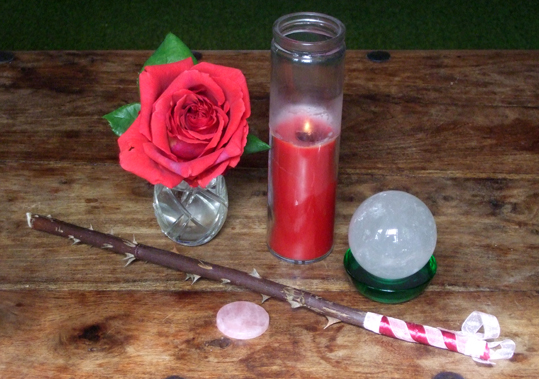 Here is my Beltane altar, which I set up yesterday on May Day Eve. On the altar are a rose from my garden, a wand I made from a wild rose stem, a crystal ball, a small rose quartz scrying mirror and a devotional candle lit from Aphrodite's Flame.

Aphrodites Flame is a sacred flame, shared in the wick by those who honour the Greek goddess of love, beauty, pleasure and fertility. The original was lit in a ritual by priestesses of Aphrodite Elle Hull and Tanisha Rose Jolie in 2009. It was inaugurated to be a never-ending source of Aphrodite’s love and blessings for anyone who wished to take part, anywhere in the world.

Candles lit from Aphrodite's Flame can be used for spells, ritual or meditation as desired, although Elle and Tanisha organise public flame-keeping days, which those who hold candles lit from the source can join in. The next is on May 6.

To find out more about Aphrodite's Flame, including how to get a candle lit from the source and how to get involved in public flame-keeping days, visit: http://aphroditesflowers.blogspot.co.uk/p/aphrodites-flame.html

I have written more about sacred flames, including Aphrodite's Flame, in my book Pagan Portal - Candle Magic. Another book that I would recommend for those who honour Aphrodite is Aphrodite's Magic, by Jane Meredith. It describes a series of magical workings for women to celebrate, understand and embrace their sexuality through the creation of a Girdle of Aphrodite.