Witch Room Tales: An Instrument to Call the Storms 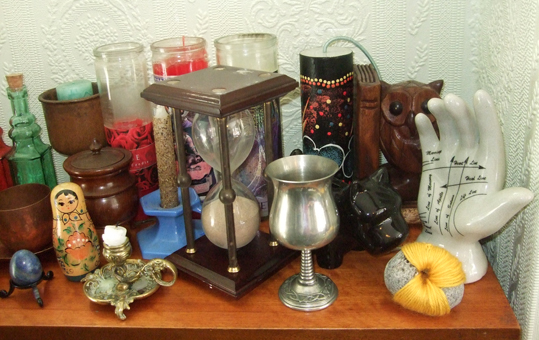 It seems some of us have had a little rain after weeks of relentless heatwave. It wasn't my fault. At least, I don't *think* it was.

I do own an instrument that seems to summon storms, though. You can see it in the picture above, at the back of a cluttered shelf in my witch room, behind a chalice and a black dog ornament. 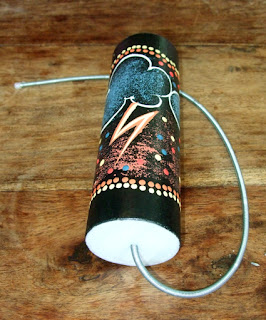 It has been there for ages, but I did get it down the other day - just in order to take the photo on the right - and I couldn't resist giving it a bit of a shake.

You see, I'd been chatting about the ethics of doing magic to summon rain on two different Facebook pages. Some people felt it should simply never be done, either because it was wrong to tamper with nature or because you couldn't tell if the consequences would be disastrous. Others felt it was okay so long you thought about it carefully, or did a divination to check you wouldn't do more harm than good.

The discussions reminded me of my rainmaker, and I decided to get it down to photograph for my Tales of the Witch Room blog posts. I wasn't actually intending to call the rain, even though I admit I had thought about it.

I bought that rainmaker at a music festival on a day that was grey with storm clouds. Everyone kept feeling ominous drips of rain. The rainmaker was on a stall. I was sitting nearby on the grass enjoying some cider with friends and listening to a band on the stage some way off. But the music kept being interrupted by a sound like crashes of thunder. It seemed everyone who passed that stall just had to pick up the rainmaker and give it a good shake. It is pretty loud.

It wasn't the noisy interruptions that made me decide to walk over to the stall and buy the rainmaker. I bought it because it seemed that every time someone used it, the drops of rain became more frequent. Call me superstitious, but I didn't want any increased chance of getting drenched somewhere in a field in Hampshire.

I would add that I'm not averse to doing weather magic. Also on the shelf in the photo you can see a stone with a hole used for a spell for sunshine.

In the past witches and cunning folk were often asked to perform weather magic. Sometimes it was to help sailors get a good wind; other times it was to allow farmers to get their crops in safely.

However, I do agree with those who say it is always sensible to think about the consequences of any magic you intend to do.