Naomi Dickins on A Historie of Magick in Kent 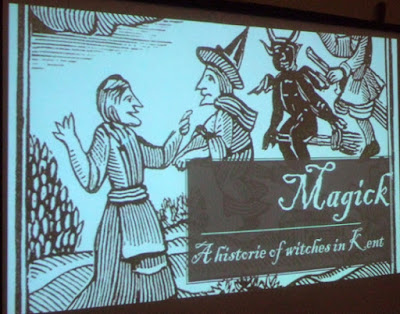 Last Saturday I went to hear a talk called A Historie of Magick in Kent by Kent local historian Naomi Dickins at Maidstone Museum. I was very interested in the topic as I myself am a Kentish maid – I was born in Bromley, in north-west Kent. I also went to the University of Kent, at Canterbury, and I lived in the county for several years. Here are my notes on some of the cases Naomi spoke about:

The Witch Craze in Europe happened between 1400 and 1700. Naomi said the word “craze” was appropriate because it did mark a time of “general human craziness”, when people were looking for witches as the causes of any misfortune and some of the confessions made were quite ludicrous.

During that time there were a large number of cases in Kent, south-east England. You can still travel to Canterbury and see a ducking stool over the River Stour, which was used to test people to see if they were witches. If they sank they were innocent, if they floated they were a witch.

There were two different courts in England that could try cases of witchcraft accusations. These were ecclesiastical courts and the local assizes. The Church tended to be a bit more lenient in punishments meted out if you were found guilty. You were more likely to be given a penance to perform than hanged. 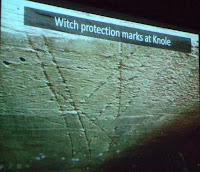 Luckily, if you were an accused witch living in Kent, you were more likely to be tried at the ecclesiastical court at Canterbury Cathedral than have a secular trial, at least in the early days of the Witch Craze. This was relatively unusual for that period. However, there were lots of accusations.

One famous trial in Kent was that of Eleanor of Cobham. I’ve blogged about that case before. Naomi explained that Eleanor was accused of conspiring to produce a child who would be a rival for the throne. It is possible she was struggling to get pregnant and she consulted midwife Margery Jourdemayne. Eleanor was also connected with two astrologers, Roger Bolingbroke and Thomas Southwell, who were accused of diabolical magic in producing horoscopes to predict the death of King Henry VI. Margery admitted giving Eleanor a potion to conceive, but was accused of also giving her a poison to kill the King.

Eleanor was examined at Leeds Castle, in Kent. She was found guilty, but was not executed. Instead she was imprisoned. Margery Jourdemayne was not so lucky. She was burned at the stake for treason, even though the usual execution for witches in England was hanging.

The second case Naomi mentioned was that of Elizabeth Barton, the Blessed Nun of Kent, from 1534. She was a popular and well loved young woman who worked for a clerk at Canterbury Cathedral.

Elizabeth was epileptic. She said that during her fits she spoke to the Virgin Mary, who gave her messages to tell people. At first this was comforting stuff – telling people to go to church, for example. In 1525, she was called to the Cathedral where the Archbishop told her she should become a nun, which she did. She was still considered blessed.

However, when she later said Mary Magdalene had told her King Henry VIII should not divorce Catherine of Arragon or he would go to hell, she became a problem for those in power. She was brought before Thomas Cromwell, who took her “confession” – written in his hand, with no witnesses. Elizabeth was hanged at Tyburn and her head put on a spike at London Bridge.

A case in Westwell in 1575 concerned the 17-year-old Mildred Norrington and an old woman called Alice. Mildred claimed to be possessed by the devil and was publicly exorcised. She roared and gnashed her teeth and it took four men to hold her down for two hours during the exorcism. She said the devil came to her bed as a black dog called Satan and claimed Alice kept him in a bottle, but released him to attack her. Three people in the village were taken ill. Alice was condemned, but later Mildred was accused of fraud and Alice was released.

In 1652 18-20 people were accused of witchcraft and became known as the Penenden Heath witches. Most came from the Maidstone area. They were mainly accused of ruining crops, but also of a murder using maleficia. They were convicted and sent to be hanged on at Penenden Heath. One of them confessed to having been made pregnant by the devil. She asked to be burned “so as not to become hereditary to her progeny in evil”.

The judge was not convinced by the evidence, but the jury convicted them. The judge sent for a reprieve order, but it arrived too late and they were hanged on Penenden Heath. Penenden is a Saxon word for a place associated with punishment.

Fear of witchcraft was widespread in Kent, as can be attested by the number of witch marks in old buildings. These were supposed to offer protection from witches. You can see an example at Knole (pictured above left).

Reginald Scott, who wrote Discoverie of Witchcraft in 1590, lived in Kent. His book was a sceptical view of witch trials. He asked for better tactics in investigations and said that tests like swimming or ducking were torture.

A Historie of Magick in Kent was at Maidstone Museums and was part of a series of events running alongside its current Terry Pratchett exhibition. The museum is at St Faith's Street, Maidstone, Kent, ME14 1LH. You can find out more here: https://museum.maidstone.gov.uk/

Naomi is teaching a Saturday class called History - Bewitched - 17th Century Witch Trials on 20 October at Tonbridge Adult Education Centre, in Kent. The cost is £30. You can find the details here: https://www.kentadulteducation.co.uk/products/pid_39905/History---Bewitched---17th-Century-Witch-Trials.aspx

The top four pictures on this post are of slides from the Naomi's talk.

Thanks for this. Fascinating. But sigh, yet more tales of persecution.