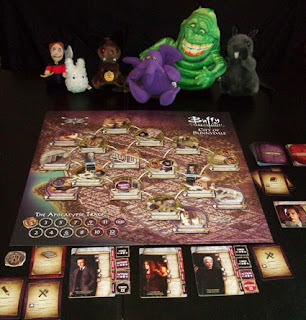 To start to get in the mood for Halloween, last night I got out some of my favourite horror games to play with my hubby. One of them, which you can see in the photo to the right, was Buffy the Vampire Slayer - The Board Game.

Oh and as you can also see in the photo, I got out some of my favourite horror-themed cuddly toys too. Yes, I'm a big kid at heart sometimes.

There have been several Buffy-themed board games spawned by the 1990s' TV series about the teenage vampire slayer of Sunnydale and her Scooby Gang friends. Some have been good, some not so much. This one I like a lot.

It is a co-operative game. Players take the roles of characters from the series: Buffy, Willow, Giles, Angel and so on. The board represents locations in Sunnydale including the high school and university, the Bronze nightclub, the Magic Shop, people's homes, cemeteries and the hellmouth responsible for much of the town's weirdness. 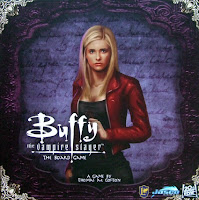 Vampires and demons appear at these locations and must be fought, while innocent townies need to be rescued. There are also three monsters of the week, which must be defeated before facing the Big Bad. Weapons, tomes, magic supplies and unique artifacts are represented by cards, which can also be collected from various locations.

The game is won if the Big Bad is beaten before the monsters give the party too many wounds or slaughter too many townies. Play takes about an hour and I'd say it is of moderate complexity - suitable for about ages 13 and up, but perfectly enjoyable by adults who like games. It works OK with two players, but is better with four people. It is listed as being for up to six.

I'm mentioning it on my blog because, of course, the Buffy TV series included several very nice witches - most prominently Willow, who you can play as a character in the game. The show offered a very positive portrayal of witches and while it was fantasy fiction, nevertheless included a few vaguely accurate portrayals of modern witchcraft practises along with all the made-up stuff.

In the game, Willow is a good character to play. She is particularly powerful if she stays in the magic shop and uses her spellcraft to keep the baddies at bay while the combat types go out and pick fights with the monsters of the week. You can see a picture of her character card on the right.

You can view Buffy the Vampire Slayer - The Board Game on Amazon. It is published by Jasco Games.

Over Halloween I'm going to be blogging more about games that depict witches or have a similar theme. One that I've blogged about in the past is Terry Pratchett The Witches Boardgame. Others include Dark Gothic and Abracada...what?