Yule Ghost Tale: Things That Go Bump in the Night 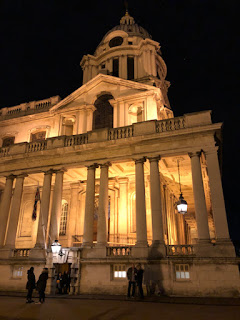 I do love a Christmas Eve ghost story, so here's a tale of something spooky that I've personally experienced.

As you know if you read my blog regularly, this autumn I started doing an MA course at the University of Greenwich, which is in the buildings of the Old Royal Naval College.

The college, as you might expect from buildings that are hundreds of years old, has quite a few tales of ghostly goings on. One of them relates to a room where go for a seminar one afternoon a week.

The room always felt a little odd to me. Right at the start of term I blogged that the staircase leading to it was a bit creepy. Several times during seminars everyone there has heard strange thumping sounds. The room often seems stifling and claustrophobic, even with the windows open. Once the door swung open for no obvious reason at all.

Yes, of course, there's almost certainly a rational explanation for all of those things. But, doing a bit of research, I also learnt that the room is supposedly haunted.

Apparently what are now the upper classrooms in Queen Mary Court were once dormitories for naval college pensioners - and the one that is my classroom was once the scene of a murder. For no reason that could be determined, one of the retired seamen brutally killed a fellow pensioner in his bed one night.

From time to time since then, people have reported hearing banging and thumping sounds that are, perhaps, the sounds of the struggles between the murderer and his victim somehow repeating again and again over the years. I even asked one of security staff if he had witnessed anything ghostly. He said he hadn't actually seen anything, but like me he had heard strange sounds in the building. He said he had heard the bumps mostly late at night when he was supposedly the only one there.

I'm glad my seminar is early in the afternoon, before it gets dark even in the depths of winter. I don't think I'd like to be on my own there late at night.

The photo shows a corner of the Old Royal Naval College at night.