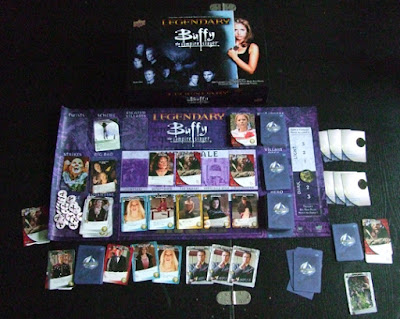 One of the presents I was given this Yule was a board game - Legendary: Buffy the Vampire Slayer. I played it twice yesterday and really enjoyed it.

There's a whole Legendary series, including Marvel Super Heroes, Aliens, Predator and Firefly as well as Buffy the Vampire Slayer. They are co-operative card games - and I must say I rather like games in which you work with the other players to defeat a common threat. I'm also a something of a Buffy fan, so this game was always going to appeal to me.

It is for one to five players. Yes, you can do it solo, although I played it with my husband and it worked very well with just the two of us. We lost the first time and won the rematch, so I would say it has an interesting level of difficulty.

Essentially it works by the players recruiting characters including Buffy, Angel, Willow and Giles plus others like Jenny Calendar and Riley Finn in an attempt to stop a Big Bad and minion villains complete an evil scheme. All of these are represented by cards and there's a mixture of luck and skill in picking the right combination to overcome the threats.

I have played some other Legendary titles in the past - including Aliens and a few of the superhero ones and I really like all of them. I'm only blogging about this one because it obviously has witches in it and I've been reviewing a series of games with witchy themes or characters, including another Buffy board game, Hogwarts Battle and Terry Pratchett - The Witches.

You can view Legendary: Buffy the Vampire Slayer on Amazon.