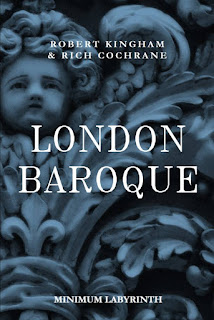 I'm a huge fan of the work of Robert Kingham and Rich Cochrane, from their stage performance Align to their guided walks into the Grey Soul and Thin Veil of London and on to the Pantheon of Pancras. Now they have published a book called London Baroque, set in the London of King James I. Here is an excerpt:


Winstanley and the waterman looked on in horror as a slender pair of arms suddenly broke out of the water and pulled Jack under. Silence and stillness followed the splash. The two men looked at each other with no idea what to do.

Then Jack bobbed up on the other side of the boat, took a gulp of air and grabbed on to the oar. The waterman leaped to reach over and haul him to safety. Jack coughed up some river-water then began to roll around the bottom of the boat in laughter. The men heard other, lighter laughter too, and then a young woman burst out of the Thames and trod water a few metres from them.

Her laughter mingled with Jack’s in the same way that their melodies had. She had very long brown hair with a greenish tint that floated over the surface of the river. River-bank flowers were woven in her hair: water snow-cups, white saxifrage, crimson willow-herb. She appeared to wear thin robes made of shadows that also floated in the water, such that it was not easy to distinguish them from her hair, and she may in fact have been naked. She was beautiful in a way that made the men sick and frightened, and stirred in them a squall of lust, yearning and wonder: in short, love.

But she paid no notice to them whatsoever. She only spoke to Jack. The conversation they had is difficult to translate into a modern language. It contained a great deal of coquettish compliments and involved a complicated play on words, each of them trying to outwit the other. They took pleasure in this and clearly knew each other of old: their talk was tinctured with nostalgia and genuine affection. After a while she dived under. Jack sat back near Winstanley and they watched her dolphin-kick her way toward the west bank, her legs and haunches barely breaking the surface, after a while indistinguishable from the river waves themselves.

‘Of course not,’ said Jack. ‘You would jump in after her and drown.'

You can go to the launch party for London Baroque on Friday 5 April at the Hoop and Grapes, 80 Farringdon Street, EC4A4. It is a free event, but you must book a ticket in advance: https://www.eventbrite.co.uk/e/london-baroque-book-launch-minimum-labyrinth-10th-anniversary-tickets-56126162864

Good post but I was wondering if you could write
a litte more on this subject? I'd be very thankful if
you could elaborate a little bit more. Thank
you!

I suggest you buy the book if you want to read more of it!

Useful info. Lucky me I discovered your web site by accident, and I am stunned why this
twist of fate did not happened earlier! I bookmarked it.

Hi! Would you mind if I share your blog with my
facebook group? There's a lot of folks that I think would really
appreciate your content. Please let me know. Many thanks