Goddesses of London: Trivia and Cloacina 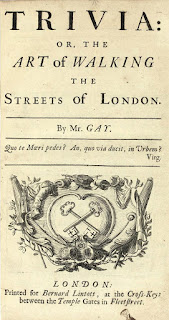 One of my resolutions this year was to blog about Gods and Goddesses of London. Today I'm writing about two lesser known Goddesses - Trivia, Roman Goddess of crossroads, and Cloacina, Goddess of city sewers.

Back in the eighteenth century, John Gay - famous as the author of The Beggar's Opera - wrote a long poem about the joys and perils of walking London's streets. It was called Trivia - and was named after the Roman deity. Although Trivia is sometimes associated with Hecate, she is a Goddess in her own right. Her name comes from the Latin word trivium, meaning the 'meeting of three roads'. At the start of his poem John Gay wrote:


I sing: Thou, Trivia! goddess, aid my song
Through spacious streets conduct thy bard along
By thee transported, I securely stray
Where winding alleys lead the doubtful way

Gay saw Trivia as a Goddess who guided walkers, made streets easier to navigate and even cleared obstacles such as gutters overflowing with refuse, including human waste. Back in the eighteenth century, waste was a big problem.

London only had a rudimentary sewage system, with few underground sewers. Toilets - at that time called bog houses or privies - connected to cess pits, which were emptied out by bucket. Night-men or scavengers collected the waste and were supposed to take it to official pits or dung hills. However, in reality, much of it went down street gutters, or 'kennels', and ended up in London's rivers, particularly the Fleet, which was a notoriously noxious open sewer back then. 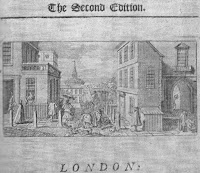 The topic of sewers and scavengers leads on to my second Goddess of London - Cloacina. Actually, Cloacina was primarily the deity of Ancient Rome's main sewer, the Cloaca Maxima, but John Gay envisaged her taking an active role in London. The Romans, perhaps a bit oddly, connected Cloacina with Venus, Goddess of love. Rome had a Sacrum Cloacina - a Shrine of Venus of the Sewer.

In Trivia, Gay, uses this association and writes that Cloacina falls in love with a London scavenger. They have a child who, with the help of the Goddess, learns to turn waste soot and oil into shoe-cleaning materials and earns a living polishing the boots of walkers. Boot-polishing was a new, up-and-coming trade back in the eighteenth century.

Gay's writing - particularly The Beggar's Opera - did a lot to affect people's attitudes towards London's poor and inspired the creation of more institutions to help those who were in the gutters of society. In Trivia, Cloacina can also be seen as an advocate of recycling - encouraging turning waste into useful products.

So, next time you are out and about walking the streets of London, why not call on the help of the Goddess Trivia to guide your way above ground, then thank Cloacina for keeping our streets clean and our sewers working below ground.

The photos are from early editions of Trivia. You can view Trivia: or, the Art of Walking the Streets of London on Amazon.