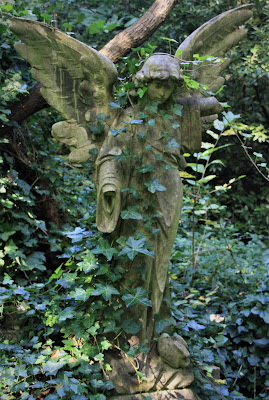 I find there's nothing like a stroll in a Gothic graveyard to get me in the mood for Halloween, or Samhain. Yesterday I returned to Nunhead - one of the Magnificent Seven Victorian Cemeteries close to where I live in south east London. I took some photos, including this one of an angel on a tomb, covered in ivy.

Nunhead was one of the places I wrote about in the early years of my blog. You can read that post here. It became very overgrown after being abandoned in the 1970s. Although it is now maintained and open to the public, much of it has been left as a wild nature reserve.

After that visit I made a resolution to visit and blog about all of London's Magnificent Seven Cemeteries: Highgate, Brompton, West Norwood, Abney Park, Kensal Green and Tower Hamlets as well as Nunhead. I still love to return to them at this time of year.

Photographs taken at Nunhead Cemetery were used in the artwork for an unusual divination deck - the Fallen Angel Oracle Cards. You can read my earlier post about the set here. That edition is now out of print, but it looks as though a new version is due to be published in early 2020 and you can view that on Amazon.