UFOs: Back to the 80s with a Trip to Rendlesham Forest 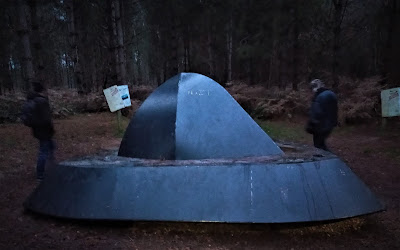 In 1980, between Christmas and New Year's Eve, Rendlesham Forest was the site of a UFO flap that has been described as ‘Britain’s Roswell’.

Several United States Air Force personnel from the twin bases at RAF Woodbridge and RAF Bentwaters, on the edge of the forest, witnessed strange lights through the trees, in the sky and over fields. Some even claimed to have seen a strange craft that had landed in the Suffolk woodlands. One said he touched hieroglyphics on its side that caused the machine to light up and had a peculiar psychological effect on him. 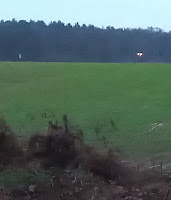 Yesterday, the master storytellers and event organisers of Minimum Labyrinth, took a coach party on a trip from London to Rendlesham Forest. I was among the group. On the journey there we were entertained with a recording of the facts, tales and growing legends of what occurred on those winter nights at the height of the Cold War and what has been said or discovered since. After lunch at Black Tiles - an excellent pub - we were taken on a guided walk on the UFO trail from gates of the MOD base to the supposed landing site. The pictures on this page are a few I took while I was there.

On the walk, a particularly uncanny thing was seen by all - a group of strange lights through the trees, moving slowly from side to side. I don't think they were caused by aliens, but I have no idea quite what they were.

Minimum Labyrinth plans to run more dates dependent on demand. You can contact the group to be added to the mailing list to hear about further dates.