Goddesses of London: Britannia & the Temple to Winter 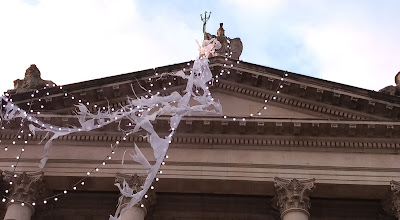 One of my resolutions for 2019 was to blog about Gods and Goddesses of London. This is my last post in the series and I am writing about Britannia, whose statue stands at the pinnacle of the Tate Britain's frontage on the bank of the Thames, which this December has been transformed into winter temple.

Britannia is best known as a female personification of the United Kingdom, but is also a Goddess who dates back to Roman times. The name is a Latinisation of the Brittonic word for the island, Pretanī. By the 1st century BC, it came to be used for Great Britain and, after the Roman conquest in 43AD, meant Roman Britain. In the 2nd century, Roman Britannia was personified as a Goddess, bearing a trident and shield and wearing a Corinthian helmet. She is still a British cultural icon and appeared on coins until a redesign in 2008.

Her statue on the pediment at the Tate Britain's Millbank entrance, along with those of a lion and a unicorn, reflects the London art gallery's function of displaying British art. It opened in 1897 and the architectural design, by Sidney R.J. Smith, was intended to look like a temple. That is emphasised at the moment with an art installation by Anne Hardy entitled The Depth of Darkness: The Return of the Light, celebrating the winter solstice.

The solstice has now passed; the light of the sun is returning, but what lies in the future for Britannia?  The new year is likely to bring big changes for her island, which could be bright or could be gloomy. I will be lighting a candle to her on New Year's Eve, and wishing for the best possible 2020 for all of us who live here.