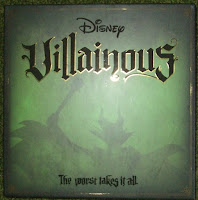 After doing witchy things, playing board games is one of my favourite activities of an evening. If the games are vaguely witch-themed, all the better. Here's my review of Villainous, a board game in which you play villains from Disney movies.

My favourite character to play is Maleficent (of course). Other villains are Jafar, Ursula, Captain Hook, Queen of Hearts, and Prince John.

It is an unusual game, as each player has their own unique board in front of them, representing their land or kingdom. The first one to complete their goals wins, and the goals are, of course, something nefarious. Malificent is trying to put curses in place across the land, for example. You interact with other players by also playing cards that allow you to send good guys, such as Ariel, Aladdin, Peter Pan, Tinker Bell, Robin Hood, Dormouse, to thwart them. 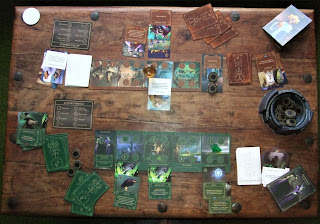 The game is for up to six players; it is strategic but not too difficult. There is a reasonable amount of variety because the characters are all a bit different, with their own decks of cards, goals and abilities.

Oh and in the centre of the table is a cauldron that players draw power tokens from - another nice witchy device.

Villainous is one of my favourite new games out this year, and looks like it is a top seller this winter. I'd say it is suitable for children aged about 10 and over as well as adults, so would be a good family game for Christmas.

You can view Villianous on Amazon - and you can follow the links below to read about some other witch-themed games I've blogged about in the past:

Awesome review thanks for the info. Good job!