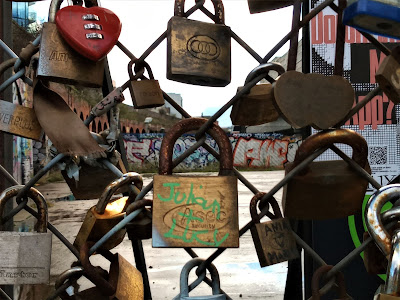 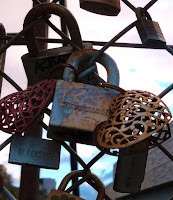 Love locks show that folklore doesn’t need to be ancient, and that the rituals of love are constantly re-invented. The idea with a love lock is that two people symbolise their commitment to each other by fastening a padlock in public place, then throwing away the key. They often write their names on it, the date and perhaps a message signifying their relationship. The most usual sites are bridges over rivers, with the key being thrown into the flowing water below.

This probably began in a Serbian spa town, according to historian Ceri Houlbrook in Spellbound: Magic, Ritual and Witchcraft. Legends of Vrnjacka Banja relate that a schoolmistress and her lover said goodbye on the town’s bridge before he left to fight in the First World War. The young soldier then fell for another and did not return. Ever since, lovers have put padlocks on what is now known as the ‘Bridge of Love’ to avoid that fate, and the custom has spread all over the world. In London, the most prominent site is a chain fence next to wasteland by Shoreditch Station.

At first glance, this is not the most obvious or likely place. It doesn’t look the most romantic of locations and, at first glance, isn’t over a river. Except that, actually, it is. According to Tom Bolton in London’s Lost Rivers, the Walbrook, a long-lost tributary of the Thames, probably starts near Shoreditch High Street. The Walbrook has not flowed above ground since the 15th century, but back in Roman times it was a sacred river. Temples including the London Mithraeum were built along its banks and archaeologists have found many votive offerings that were thrown into its waters.

In Lies Sleeping, one of the novels in Ben Aaronovitch’s Rivers of London urban fantasy series, the goddess of the Walbrook runs a pub by Shoreditch Station. The pub doesn’t exist in real-life London, but if it did, it would probably be on that spot of wasteland decorated with love locks.

The Walbrook is the shortest of London’s lost rivers, so this Valentine’s Day you could take a romantic walk from Shoreditch Station's fence of love to where the Walbrook joins the Thames. The route below roughly follows the course of the underground water, visiting some historic sites along the way.

Cross Shoreditch High Street and visit Holywell Lane. Back in the Middle Ages, Holywell Lane marked one edge of Holywell nunnery. As the name suggests, there was an ancient sacred well there. Sadly, it isn’t there now, but we can imagine it. Go down Curtain Road, which was earlier called Holywell Street before being renamed after the 16th century Curtain Theatre. Continue south west down Appold Street and across Broadgate Circle then head to Finsbury Circus Garden, which is London’s oldest public park, dating to 1606.

The area was previously known as Fensbury moor. It was formed when culverts cut into London Wall for the Walbrook were blocked after the Romans left. The city wall was breached in the 15th century to create Moorgate. Paths, trees, and benches were later put there to create the park. Finsbury Circus Garden is still a romantic place to spend some time and enjoy early flowers on a spring morning. 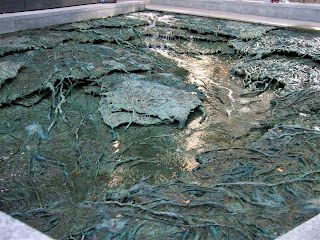 Cross London Wall and continue south west to the road that is still called Walbrook. Visit the London Mithraeum if you get a chance. I’ve blogged about that earlier. It is free to enter, but you need to book tickets in advance. Further down Walbrook, in the Bloomberg Arcade, is a sculpture called Forgotten Streams by Cristina Iglesias. Constructed out of bronze, it is designed to look like a riverbed, and is built over a section of the Walbrook to remind people of what lies below the ground.

Continue down Walbrook and Dowgate Hill to the end of Cousin Lane, where you will see the Thames. Steps can take you to the shore at low tide. A nearby spot called Walbrook Wharf marks where the tributary joins the Thames.

For a more intricate walking route following the Walbrook and other lost rivers of London, I recommend getting Tom Bolton’s books. Volume 1 includes the Walbrook, and volume 2 has just been published. He suggests making a votive offering to the Thames. If you fastened a love lock at the start of this journey, this might be a point to cast the key into the water. However, these days, I am reticent about suggesting littering. It might be more environmentally friendly to use a combination padlock and maybe buy a little food suitable for wildlife. Valentine’s Day is also, according to folklore, the day birds start to mate each spring. They could probably do with some help fattening up after the cold winter months. 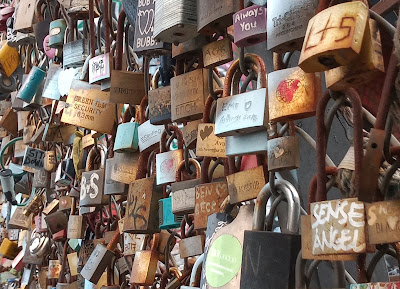 Thanks for the recommendation