Tomorrow being April Fool's Day, I thought I'd record a video of me reading the chapter I wrote for Naming the Goddess, by Moon Books. My chapter is about Eris, the Trickster Goddess of Greek Mythology. 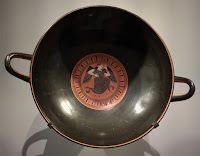 For the Ancient Greeks, Eris was a much-feared deity who brought about, well, chaos. Even depicting her was considered to be running the risk of attracting her attentions, although the recent Troy exhibition included an illustration of her on a bowl. You can see that in the photo to the right.

In the 20th century, Eris was rediscovered and gained a more positive reputation as a Goddess offering personal freedom. She is honoured by members of the Discordian Society and chaos magicians, as well as by Erisian witches like myself. For me, she has offered artistic inspiration as well as realisation that a sense of humour and an ability to think outside the box can be helpful when living in chaotic times. And we are certainly doing that at the moment.

Like all trickster deities, modern pagans show a mixture of feelings about her. Some regard her as evil because her prank, of throwing a golden apple labelled to the "most beautiful one" into a party of vain fellow deities, began the disagreement that led to the start of the Trojan War. Others, myself included, feel that blaming Eris for a war actually declared by patriarchal Greek men, is just typical of the patriarchy.

Eris herself would probably just laugh at any rows or discord between those holding such opposing views. Why can't both be true?

You can view Naming the Goddess on Amazon.