Magical Games: The 4 Gods Board Game 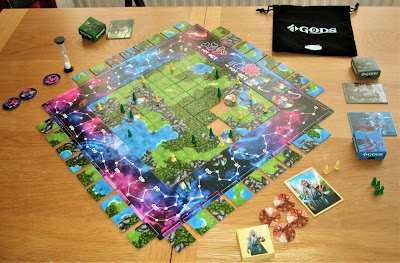 Playing board games is one of the things I've been doing quite a lot at weekends during lockdown. Over the bank holiday I got round to trying 4 Gods. I really like it.

Four Gods is a world-building game for two to four players, with each taking the role of one of four deities who each gain influence from different types of terrain: mountains, plains, forests and water. You draw tiles from a bag which show various combinations of those types of landscape, then place them to create a world. You can also place priests to try to gain control of areas, and build legendary cities. All these things help you score points at the end. 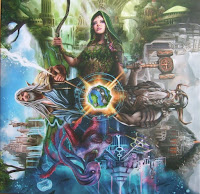 The game is played in real time and takes half an hour, so it is fast-paced but doesn't go on too long. It is also really quick to set up, as the tiles are stored in a nice black velvet bag that comes with the box. All you have to do is take the bag and other bits out of the box, put them on the table neatly, and you are ready to play.

I found it totally addictive, even though my husband has got the highest score in every match so far. There's definitely a strong strategy element to winning, and I'm determined to master it and get even...

The reason I'm mentioning this game on my blog, is that 4 Gods has rather rather pagan theme, with its gods and goddesses and beautiful, natural world. I've blogged in the past about games that are about witches, including Terry Pratchett The Witches Board Game, The Witching Hour, and Harry Potter Hogwarts Battle, well as games that are a bit fantastical, such as Disney Villainous. Over the past few weeks I've seen people asking about pagan games on various social media pages, and this one fits the description.

You can view 4 Gods on Amazon. It is published by Asmodee and Ludically.