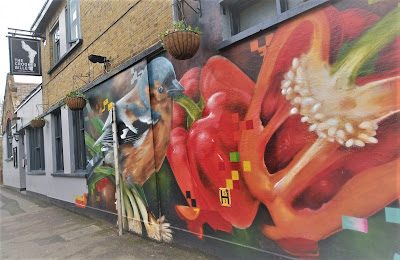 There's a belief in folklore that birds start to pair up and look for a place to nest around the time of St Valentine's Day. I've written more about that over at the Moon Books Blog, but with the thought in mind I decided to share photos of two beautiful murals in my local town, each depicting different birds. 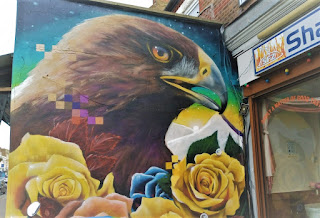 At the top is a painting of a chaffinch pecking at a pepper on the side of the Crooked Billet pub, in Penge. Although the building that's there now is relatively modern, it stands on the site of the oldest pub in the area. A coaching inn existed there as far back as 1601. It's kind of hard to believe that then Penge was a rural hamlet on the edge of common grazing land, rather than a London suburb.

The other photo shows a mural on the side of a cafe in Maple Road, also in Penge. I think it's a sparrowhawk with a big bunch of yellow roses. The mural there is relatively new as earlier pictures of the cafe online show a different bird mural on that wall. I took both photos yesterday on my way to take a box of donations to my local charity shop. I've been decluttering and tidying my bedroom. Bedroom decluttering is another traditional pre-Valentine's Day custom I suspect.