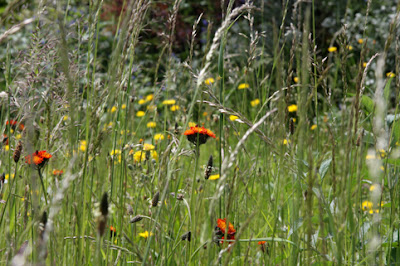 Honouring nature in the here and now is more important to me, as a modern pagan, than worshipping ancient gods. There, I've said it. I know that might be a controversial thing to say - some might even consider I'm not really a pagan, just someone who cares about the environment. That's a valid view, but there are many definitions of what paganism means. To me it is a nature religion, so caring for nature is a sacred task as well as a sensible one for protecting the world for the future.

I blogged on Earth Day that I was going to do a local clean-up and I was *not* going to mow my lawn that day. Well, I've now signed up for No Mow May - a campaign organised by Plantlife. The idea is to let lawns grow this month to allow wildflowers flourish as food for bees, butterflies and other insects. Plantlife says on its website: "Lawns are sometimes considered to be wastelands for wildlife but...under the right management, they can be biodiversity hotspots." 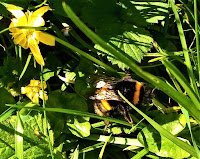 The conservation charity runs a citizen science survey called Every Flower Counts, which last year recorded almost 100 species of pollinators on lawns including 25 types of moth and butterfly and 24 types of bee. Plantlife adds:

"A one metre square on a typical EFC lawn last year had 17 daisies and a smattering of buttercups and dandelions. Across lawns, germander speedwell and field forget-me-nots were next most likely to show. Such a square of lawn would produce about two milligrams of nectar sugar and three microlitres of pollen per day. Dandelion-clad lawns are particularly wildlife friendly as they are disproportionately important for pollinators."

People are starting to embrace wilder gardens in general, and more accept that lawns don't need to be barren swathes of cut grass to be attractive. In fact, they can be more beautiful with a few wildflowers among the green. That's certainly my opinion.

I will confess I mowed my lawn for the first time this year on April 29th. I considered not mowing it at all, but I had a forest of sycamore saplings growing among the grass that my little Flymo would have been unable to tackle if I'd left it any longer. I'll now leave it unmown in May, and cut it as infrequently as possible after that. I also hope to take part in the Every Flower Counts survey later in the month, and discover what beautiful and useful plants I can spot. If you're interested in the magic and folklore of some of the most common wildflowers in our lawns, I wrote about that over at the Moon Books Blog.

You can find out more about No Mow May here: https://nomowmay.plantlife.org.uk/what-is-no-mow-may/