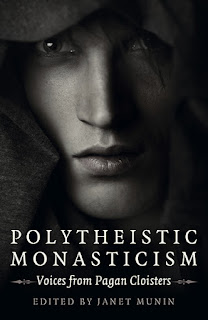 For any who have wondered what it might be like to focus their lives more completely on devotion of the Goddess or other Pagan deities, a new book offers practical insights. Janet Munin is the creator and editor of Polytheistic Monasticism - Voices from Pagan Cloisteters,  a collection of essays on an evolution of the polytheistic-animist revival. Janet is also the editor of  Queen of the Great Below: An Anthology in Honor of Ereshkigal, published by Bibliotheca Alexandrina.
I chatted with Janet to find out more about polytheistic monasticism and her own background:

Q: Please can you tell me a bit about yourself and your background in paganism?

A: I’ve been a Pagan since the spring of 1988, so there’s a lot to my background (laughs). The short version is that I’ve always been deeply drawn to the Divine, but also have a deeply questing nature. I’ve explored a variety of paths, both formally and informally. I’m a second-degree priestess in an underworld tradition, in which I’m a priestess of Ereshkigal. I’m also ordained as a Grail Priestess in fellowship of the Holy Grail. I define myself primarily as a devotional polytheist, and right now my primary relationships are with a combination of Norse and Near Eastern deities. I also have a Masters Degree in Comparative Religion from the University of Washington, and did two years of graduate work at Seattle University’s School of Theology and Ministry.

Q: Your book Polytheistic Monasticism: Voices From Pagan Cloisters sounds really interesting. Can you start out by describing what polytheistic monasticism is?

A: In this context, “polytheistic monasticism” is a shorthand for “polytheistic and animist monasticism in the modern Western polytheistic and Pagan revival”. As described in this book, it is a path – a vocation – of putting devotion to one’s gods and spirits at the centre of life and then reinforcing that commitment through a structure of practices like devotion, simplicity, contemplation, formal prayer schedule and other things, usually formalised through one or more vows. The structure and vows are what differentiates it from other forms of devotional polytheism. Although I need to add that there is no single, authoritative definition. 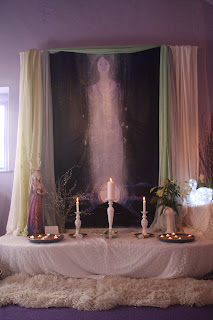 Q: Can you give me some examples of how modern-day pagans are exploring monastic lifestyles?

A: A monastic lifestyle is grounded in deep devotion to the Holy Powers. That devotion is centred by stepping away from whatever is considered the “normal” lifestyle of one’s culture and adopting a structure of practices to limit what might interfere with the focus on devotion. One of the common practices is committing to a regular cycle of prayers or devotions. Some monastics adopt special clothing and/or head coverings as a sign of their devotion. Regular contemplative practice is another hallmark. One lovely essay in the book is about “the custody of the eyes,” in which author Rebecca Korvo describes her practice of being mindful about what she looks at and takes into her consciousness. Essentially, polytheistic monasticism is about adopting whatever spiritual practices and disciplines are appropriate for that person and Those whom they worship, and building a lifestyle grounded in them.

It’s important to note that virtually every “monastic” practice can also be adopted by non-monastics. Even if someone doesn’t decide to commit to a full-time monastic lifestyle – which is a huge commitment – they may discover practices which deepen their connections to the Holy Powers and nourish their spirits.

Q: How did you become interested in polytheistic monasticism?

A: I’ve always felt a draw to a lifestyle that was focused on entirely on spiritual practices, worship, and study. I grew up as a very devout non-denominational Protestant, but was always slightly envious of the nuns in “The Sound of Music.” (Even though I knew actual convent life was far more serious!) After a personal tragedy in 2007, I fell into more than a decade of depression. During that time a lot of what had been “normal life” for me dropped away. I found myself without community. I had always been an introvert, and my eclectic personal spirituality left me feeling like I didn’t or wouldn’t fit in in most Pagan groups that I was aware of. I thought that since I was already living something like a hermit lifestyle, maybe I should explore formalizing it as a religious practice.

I went online to do some research and found the Black Stone Abbey website, run by Danica Swanson, which was “a contemplative dark incubation retreat inspired by pre-Christian Norse and Germanic religious and folk traditions”. I connected with Danica via social media and discovered that we had a mutual friend who had been telling of each us for years that we needed to meet. We finally did get together and discovered we were indeed kindred spirits. She became my monastic role model, and she introduced me to others who were on this path.

What I eventually discovered, however, was that monasticism is not my path. Not at this time, anyway. But it was important that I went through the discernment process and realised that. In fact, doing discernment is classically part of the process a person goes through before taking their first monastic vows. It’s an attractive lifestyle in many ways, but it’s not for everyone.

Q: For any pagans who are interested in exploring a monastic spiritual path but don't know how to do that, apart from reading your book, what would you recommend they try?

A: A person should engage in discernment, as I mentioned above. I would suggest that someone who wants to explore monasticism select a single practice and make a promise – to themselves and to their gods – to observe it steadily for a specific amount of time (at least a few weeks) and see how it goes. At the end, they should ask themselves if they were they able to keep the promise, even when they didn’t feel like doing so. Did the practice enhance their connection with the Holy Powers? Did it feed their soul? Do they hunger for more? If it does feel right and good, and if the Powers support it, add an additional discipline and accompanying promise, and proceed gradually from there. If the initial experiment didn’t turn out well, try again with a different practice, because not all practices are suitable for everyone. But if you find that you’re bored, or feel like you’re not benefiting from it, and your gods aren’t urging you to go deeper, then maybe it’s not the right path for you. I’d like to say that it doesn’t have to be “all or nothing,” but one of the characteristics of monasticism is that it provides the fundamental pattern for a person’s life. However: a person can integrate elements of monasticism into their life without needing to become a full-fledged monastic. For example, you can adopt a practice of praying at specific times throughout the day – which is a characteristic monastic practice – without being a monastic. 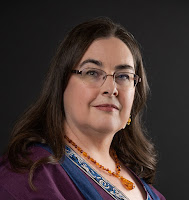 Q:  Are there more books about polytheistic monasticism on the way?

A: I hope so! I won’t be working on them, but since this book appeared I’ve seen a number of people saying that they wish they had seen the original call for submissions, and others saying they were so happy to find out that there was any book on the topic at all. I really hope that this book is only the first of many.

Q: What are you working on now and what are your plans for the future?

A: I’m making notes for a couple of classes that I would like to offer online. One is about concepts in comparative religion, which would help people be able to think about and discuss religion in terms other than whether or not they believe in a particular path. The other is an in-depth exploration of the story of the Descent of Inanna, both in terms of what it meant to people in the ancient world and what it means today. In addition to honoring both Inanna and Ereshkigal, it would also teach people different ways of looking at and thinking about religious stories.

You can view Polytheistic Monasticism on Amazon and at the website of publisher Moon Books. Pictured are the cover of Janet's latest book, an altar inside Glastonbury Goddess Temple, Janet Munin.