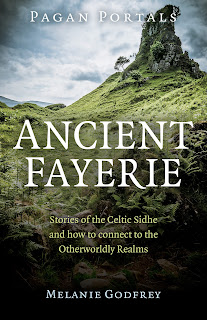 Here is an early peek at a book on Ancient Fayerie by Melanie Godfrey. It's published by Moon Books and is due to reach shops later this summer, so enjoy this chance to glimpse what's inside:

Imagine a world without ancient stories, without myths and legends. No tales of trolls roaming free on mountain tops, or dragon races in the skies, no fairies dancing on meadows green or water sprites flitting between the bubbles on dancing river tides. I couldn’t imagine this. The world would seem still, yet empty of magic; a magic that embodies the mystery of life, an enchantment that inspires my soul to dream of infinite possibilities. Oh, it would be such a dull place if there were no time-honoured tales to tell. My imaginings would seem silly to the few and crazy to most.

But in my imagination, fayeries do exist. Dragons do dance in cloud-filled skies, trolls do hide their treasures of nuts and berries in forest glens, and they walk amid the majestic mountain ranges, their heads almost touching the clouds. Fayeries do hold court and ride tiny white horses with their manes gleaming of rainbow starlight. I’m glad the myths and legends of the Earth’s cultures were spoken of and retold in stories again and again. I am glad that the elemental kingdoms are alive – in my imagination and vision, anyway. I know many of you feel the same way, too.

Fayerie is an age-old name and is a sphere that has always existed. Prehistoric folk were more attuned to the cycles of the year. They interacted daily with the genius loci, which is a Latin word, and means the spirit, or guardians of the land. Fayerie is a state of mind rather than a place, it is a realm we enter as we pass through a spiritual dimension into the Otherworld and access higher states of consciousness, this connection can be accessed in our mind through meditation, or through visions.

Animism is a time-honoured belief system, a belief that the trees, the stones, the oceans, the mountains, the weather systems, the animals, and the human beings, all share a parallel feature. They embody a spirit – a soul that gives them life force energy. Animism sees nature as bestowing a language that allows it to subtly communicate with human beings, quite often in profound ways. Animism is about being in relationship with the land. Of pursuing a deeper connection with the earths guardian spirits who will, in turn, gift invaluable insights and share ancient wisdom teachings. The animals, the trees, the stones, have a “voice” that needs to be heard. Animism is an experience that is universal. Enabling humans to re-establish their indigenous natures by perceiving the rivers, mountains, and trees, not just as objects to wield, but as kindred to form a relationship with. The ancient fayerie tales, the myths, and legends of old, all carry elements of animistic understanding.

The whole planet is amassed with Earth guardians, waiting patiently for you to discover, but only if they allow and on their terms. If you ever encounter a fayerie being, embrace a common politeness, and meet them in a ceremonial fashion, as they are not of human mind, so they require a different kind of welcoming. Meet them humbly, and never make promises you cannot keep. Accept that not all the fair folk wish to be discovered, so respect their boundaries and their lands. The wild places, sacred hills, mounds, and fayerie trees that adorn the Celtic countryside should be refrained from being cut down or destroyed, littered, or nonchalantly walked upon without any kind of respect. And enter fayerie environments with reverence, for the People of Peace prefer to live secluded, secretive lives away from most human eyes, as most humans do not meet the land respectfully. The People of Peace hid away, and humans forgot who they were. They are hidden, but not in hiding. When you do cross paths with an Elven soul, offer them grace, and show your kindliness. Bless them with a poem, a song, fresh food, fresh milk, bread, cakes, honey, nuts, or mead. Food that you have especially baked will gratefully be accepted, as then they will know you come in warm-hearted and peaceful ways. Be mindful of their boundaries and that you are two different species entirely, even if you have fayerie soul. When you journey into the Otherworlds, stay impartial, grounded, and calm in nature. Remember to bring your mind firmly back to your human senses, as many folks have been known to become lost in the land of enchantment, it is a timeless place. Not everything is as it seems in their world. Fayerie cannot lie, but they can be tricksters with words and shapeshift. They often wear glamour suits to show themselves, as they are mainly wisps of energy from within the earth and difficult to discern in wild places.

You can view Ancient Fayerie on Amazon and at Moon Books