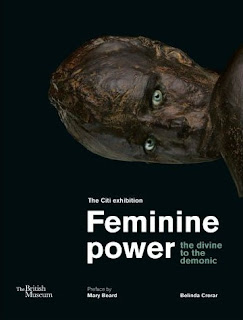 If you have any interest in Goddesses and their influence on the world, go to the British Museum exhibition Feminine Power: The Divine to the Demonic if you can. I can't recommend it enough. Whether you visit in person or not, get yourself a copy of the accompanying catalogue, also called Femine Power. I got mine at a launch event, and I've just finished reading it from cover to cover. I found it inspiring and empowering. The book goes into more depth than the exhibition on its own, adding information on divine women from all over the world and from the ancient past to now.

"Divine women – in many guises – have featured in every world faith, from deep history until the present day, inspiring people and cultures across the world. In a cross-cultural and global approach, this book discusses Eve alongside Inanna, Radha and Aphrodite in the context of sex and desire, while in the chapter in evil, witches and Hecate are compared with other deities like Lamashtu and the Cihuateotl, as well as monstrous women such as Taraka, Medusa, Rangda and Lilith. Ideas of justice and defence are explored in the figures of Athena, Sekhmet and Kali, and the final chapter on compassion and salvation uncovers links between Isis, Mary, Tara and Guanyin."

Both the exhibition and book organise the Goddesses covered in five themes: creation and nature; passion and desire; magic and malice; justice and defence; and compassion, wisdom and salvation. Book author and museum curator Belinda Crerar writes: "Together, they show how feminine influence has been conceived in a phenomenal range of human experience.”

I’ve long been irritated by stranglehold on modern paganism of the concept of dividing women and Goddesses into maidens, mothers, or crones, so I particularly love that this shows powerful feminine figures were influential in most aspects of life – not just sexual activity or reproductive capability.

Another popular concept - that of the ancient matriarchy – is discussed in the preface, written by Mary Beard. She points out the aim of the exhibition and book “has not been to search out forgotten mother goddesses, or to uncover traces of a lost world in which…women ruled… The myth of matriarchy is exactly that: a myth.” However, she does point out that “questions of sex, gender and desire” have always been connected with ideas of divine power, and those questions are still relevant today. The stories about these goddesses can be interpreted in many ways. Some of the Goddesses force us to question gender concepts by having prowess in activities thought to be largely a male preserve, such as fighting, or by being depicted with both male and female genitalia.

"The publication concludes with a discussion of contemporary art and modern interpretations of goddesses. Until the mid-twentieth century, the disciplines of theology, archaeology and history were heavily dominated by male academics, resulting in the under-representation of women’s experiences and fewer studies on female divinity. This timely book, which is packed with fascinating insights into different cultures and beliefs, seeks to redress that balance."

The catalogue is also full of illustrations with information about the items and artworks on display in the exhibition. I know it is going to be an essential reference book for myself as I write about Goddesses and divine women in the future.

You can view Feminine Power: The Divine to the Demonic on Amazon as well as finding the book in the British Museum shop online and in the gift shop at the end of the exhibition.