A full moon, a festival, flowers and sex 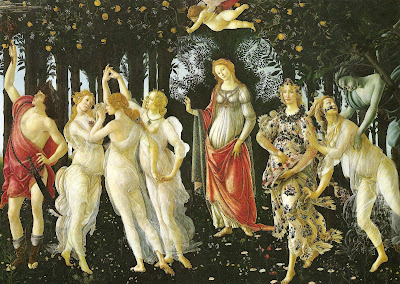 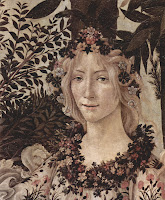 The full moon this Wednesday, April 28, is called the Awakening Moon or Growing Moon according to the pagan calendar, but we are so close to May Day that Flower Moon seems more appropriate - although officially that is the name for the full moon in the month of May itself.

One reason for this is that April 28 is also the start of Floralia - an ancient Roman festival dedicated to the goddess Flora. It was a bit similar to May Day celebrations, as it was when Romans celebrated the renewal of the cycle of life with flowers, dancing, drinking - and shagging.

Flora was also a close friend of Venus, Goddess of Love and Gardens. You can see them both in the picture Primavera

, which means the arrival of spring, by Sandro Botticelli, shown at the top.

Venus is the goddess in the middle and Flora is just beside her, shown in the detail to the right. Other gods and goddesses in the picture are, from left to right, Mercury, the Three Graces, Cupid and Death, who is just stopping a young woman from joining the party.

All I can say is I hope this Floralia and May Day you have as good a time as any Roman might have done, hopefully without encountering Death.

I had the idea that the pair on the right were Zephyrus and Chloris, rather than Death and a miscellaneous woman. I suppose a lot of these identifications are guesswork, though.

You could be right that it is Zephyrus and Chloris. A talk I heard once gave it as an example of how painters loved to show that in the midst of life we are in death - a theme that often appears in pictures. But they could have been totally wrong.