How much should witchcraft training cost? 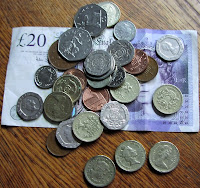 The other day a friend suggested that I write about some controversial subjects on A Bad Witch's Blog. So here goes - a question about money, which is always a tricky issue.

How much should witches and other pagan teachers charge for training?

Here are my musings on the subject - but others might think differently:

Last year, an experienced witch invited me to a one-day workshop they were running. Without looking too closely at the details, I said yes. I then had a double take when they asked me for a cheque for £120.

I admit I was shocked - most of the pagan workshops I've been to cost around £20 to £40 for the day and I had simply assumed this one would be in that sort of price too. I only work part-time, because I care for my elderly, disabled mum, so I don't earn very much money and even £40 has to be saved for carefully. I couldn't afford to pay £120 for something non-essential.

But it wasn't just that I couldn't afford it - I also felt it was excessive. I mean, £120 might be OK for a day of one-on-one tuition, but a workshop would probably have at least half a dozen people - possibly many more - and with them paying £120 each, that adds up to a fair amount for a day's work.
Perhaps I am being unfair. Perhaps there were high running costs involved, but the event was taking place at a private house, not a conference suite in a hotel, so venue hire can't have been a big part of that.

Perhaps posh food was being put on at lunchtime and perhaps there were valuable materials involved. Perhaps the teaching being offered was unique. Perhaps the end-of-day ritual was going to solve all my problems and open up amazing new opportunities for me. As I said, I didn't go, so I can't say.

And, compared with training for professional skills, £120 a day is cheap. When I wanted to learn to use the DTP software Adobe InDesign,

even my union, the NUJ, wanted around £250 for a day's training. Most companies charge much more. I eventually signed up for a series of InDesign evening classes at my local adult education centre for a price not much less than that witchy workshop I balked at.

Perhaps my attitude that witchcraft training should be inexpensive comes from my early days as a witch, when it was generally thought that training for witches should ideally be free. But even then that wasn't often the case.

Like many London pagans of my era, I paid a moderate amount to go on a Circlework course run by Shan, author of Circlework: A DIY Handbook of Practical Ritual.

After that, I went along to training evenings at a Wiccan coven for a year, before being initiated. The High Priestess charged everyone a couple of pounds each evening to cover such things as coffee, biccies and use of materials. Considering that we sometimes did things like making incense using ingredients she supplied, she was probably making a loss rather than a profit out of us.

The attitude then was that training witches should be done for love of the Craft, not to make money - and making large amounts of money out of it was generally considered objectionable.

But times have changed. Why shouldn't witches profit from their skills and knowledge, just as professional designers can earn a living teaching InDesign?

What do you think? Should witchcraft training be free, cheap or whatever the market can stand?

I think it depends on the value of what you're learning. Practical magic that teaches how to throw together a poppet using the herbs in your kitchen, your old underwear, and a consecration rite that you can use to make your life better financially, spiritually, mentally, or physically, then yeah, it's worth some cash.

If it's just interesting conversation, I'm not paying for that.

I'm new to Wicca and like other newbies I'm eager to learn. I am also aware though that people like myself are sitting ducks for other's to make a quick buck out of.There is no corolation with how expensive a tuition/workshop is and how good it will be for you. I am lucky that my teacher is a member of my family and so there is no charge but I wonder how many are being put off by the high cost of tuition, either for workshops or online courses. Have some of these 'teachers' a real need to help those new to the craft to learn or are they just jumping on a bandwagon as Wicca and Paganism in general comes out of the closet and becomes more popular.

Apprenticeship is the Tradition... I think since the 70's folks have been charging for 'witchcraft' introduction and initiation. I don't judge it... much as the feel of your post, I agree with what you've observed.
I've done 'seminars' in Denmark and UK ... but not on any Traditions, just on what I've created as tools to help you penetrate those Traditions and work more with them.
I do workshops at my bench to pass along what I've learned in making. I try to be fair with my pricing. I like your post and the questions it raises ... I think there should be discussion about charging for Traditional practices. And I'm not saying it's right or wrong... I'm saying its a discussion that needs to be going on in our greater community. Ta.