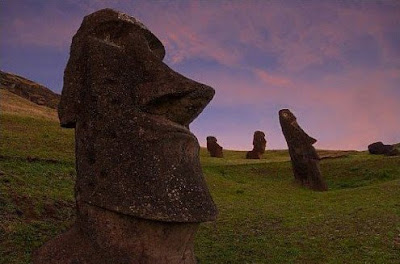 On July 11 there is a total solar eclipse. Sadly, it won't be visible from the UK.

One of the best places to view it will be the mysterious Easter Island, in Polynesia, famous for its moai - monolithic human figures with huge heads carved from rock.

There are many theories as to what the moai are. Most people think they they represent the gods or deified ancestors of the now-dead inhabitants of the island, although some claim they are aliens who visited the Earth in ages past. Whichever is the truth, the religion that saw the creation of moai brought destruction to those who worshipped them - which seems an appropriate tale of doom to tell as the eclipse approaches.

It is also a cautionary tale, as it was environmental disaster caused by over-use of resources that brought about the collapse of the ancient civilisation of the Easter Islanders and their eventual annihilation. And one theory is that this was done in the worship of the moia.

The statues are huge - up to 10m tall and weighing up to 86 tons. One unfinished sculpture, if completed, would have been about 21m and weighed around 270 tons.

The statues were hewn in a quarry and many were then transported to the coast, where they were erected. One theory is that logs were used to roll the moai into position - and eventually almost all the islands' trees were felled to this end. The massive deforestation destroyed the islands ecosystem - and also meant the islanders could no longer build boats either to fish or to escape. They died out because their land could no longer sustain them.

When Europeans arrived at Easter Island in 1722, there was almost no sign of the great civilisation that once ruled there other than the mysterious statues.

Perhaps this tale of a civilisation that destroyed itself through blind obedience to religion, and through not heeding the signs of impending environmental disaster, can at least teach lessons to us now in how to deal with the problems we face in our modern world.

And, for this reason, I am choosing the moai as the Bad Witch's Gods of the Week.

The Photographic Print of Moai Statues at Dusk from Andrew Newey

above is available from Amazon

Island at the End of the World: The Turbulent History of Easter Island

The Mystery of Easter Island

That was interesting food for thought, thank you.