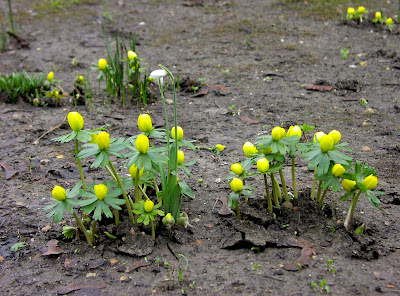 Yesterday morning on the way to work, I spotted my first snowdrop of the spring. I've seen quite a few snowdrops just about to peep out of green shoots, but this was the first one I had seen in bloom this year.

It was just a single white flower amid a scattering of pretty yellow flowers poking through the bare soil and just about to open their petals. I think the yellow plants are winter aconite.

Along with snowdrops, winter aconite is one of the first flowers of spring and can survive the frosts of February.

Aconite is poisonous and, according to Greek and Roman mythology, Medea tried to kill Theseus by poisoning him with aconite in his wine. In that culture, aconite was thought to be the saliva of Cerberus, the three-headed dog that guards the Underworld. Hercules dragged Cerberus up from the Underworld and, where the dog drooled along the path, its saliva hardened in the soil and made the plants that grew there poisonous.

Snowdrops are seen in many religions as a sign from the gods that good times will come once more. Seeing the first snowdrop of the year growing wild means the passing of sorrow.