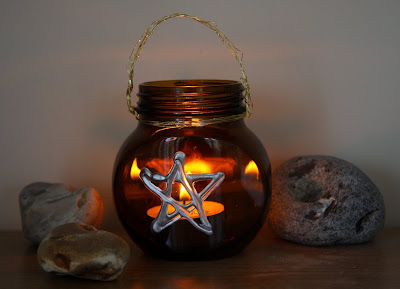 For quite a while I'd been looking for a brown tealight holder to represent the element of earth when I cast a circle, but without success.

Tealight holders in the primary colours of red, green, blue and yellow are pretty easy to get hold of, but brown or black ones aren't.

But when I was washing out an empty Marmite jar to put in the recycling I got inspired. Marmite jars are made of sturdy, brown glass and would make ideal holders for small candles.

So, instead of putting it in the glass recycling bin, I carefully scrubbed the label off, painted a five-pointed star (called a pentagram) on it with a glass-painting pen and made a little handle to hang it by from some pretty gold-coloured wire that had once decorated a cheap bottle of red wine.

All I had to do then was pop a tealight in it and, hey presto, one earth light.

OK, I do admit I'm not the greatest of artists and my drawing of a pentagram is a bit amateur - but I do feel that when you make your own ritual tools they can help your magic work better than if you just buy something from a shop.

I like to help our sister Witches' economy by buying their wares , but as you said , so much more satisying when it's crafted at home - and recycled - awesome!

No words are enough,
But reused in the wind,
Empty spaces echo still.

That looks so cool!I've experimented with recycling jars to use as candle holders but only ever used clear ones, love the effect that the brown glass gives! Great idea.

What a brilliant idea Badwitch! It looks really cool, you've done a good job. Made me think about getting creative and seeing what I can recycle into something else.

There is no better way to make your home friendlier and more welcoming than with the personalized DIY mason candle jars. With a bit of creativity, some pattern tape and several colors for painting the jar, you can now create your own small candle support, in the privacy of your own home!