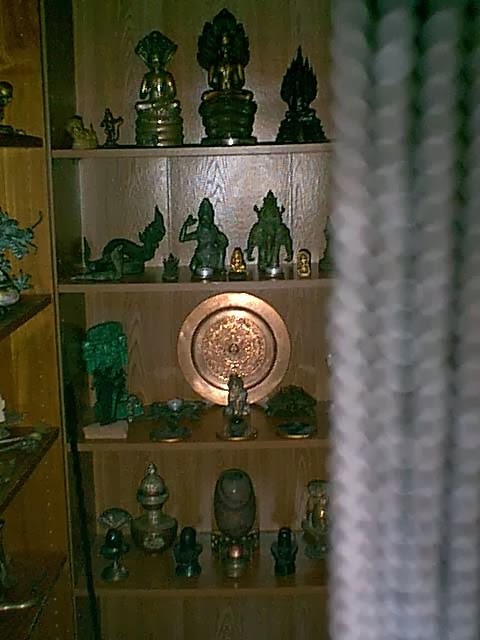 The dark nights before Yule are a time for telling stories of ghosts and other spookiness - and here are some pictures that are definitely mysterious. The photos were sent to me by Lee, the High Priest of the Coven of the Catta. 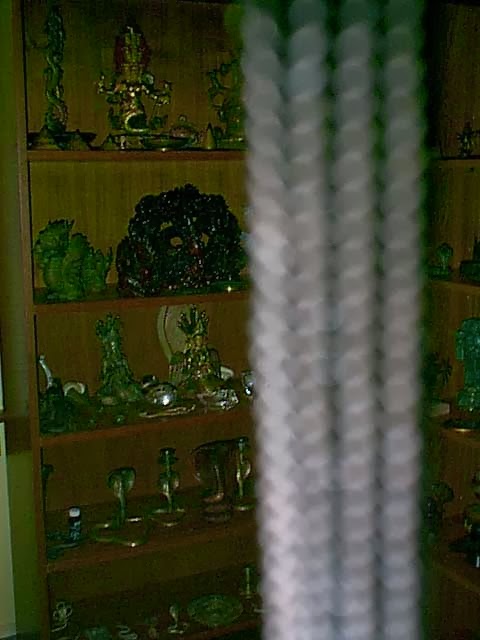 Lee said: "This is in response to your request for interesting photos from rituals. I took these pictures with a digital camera a few years ago after our coven ritual in which we had raised the cone of power. I was actually just taking pictures of objects around the temple when these ectoplasm ribbons showed up in the center of the temple where the cone of power was raised. I checked the lens and there was nothing on it and interestingly the ectoplasm seemed to stay in the center of the temple no matter from where I took the pictures. If it was something on the lens it would have been at the same place.

"Notice how three ribbons rotate one way and two the other way. These ribbons remind me of the silver cingulum we wear for our second degree, but mine was around my waist. I took several other pictures where these did not show up. I can think of no explanation except for the energy left after ritual."

Thanks for sharing this story and these inexplicable photos. BB

Greetings from Los angeles! I'm bored to
death at work so I decided to browse your blog on my iphone during
lunch break. I really like the knowledge you provide here and can't wait to take a look when I get home.
I'm surprised at how quick your blog loaded on my mobile ..
I'm not even using WIFI, just 3G .. Anyhow, great site!

An outstanding share! I have just forwarded this onto a friend
who had been conducting a little research on this.
And he actually ordered me dinner due to the fact that
I discovered it for him... lol. So let me reword this.... Thank
YOU for the meal!! But yeah, thanx for spending time to
discuss this matter here on your web page.

First off I would like to say great blog! I had a quick question which I'd like to
ask if you don't mind. I was curious to know how you center yourself and clear your head before writing.

I have had a hard time clearing my thoughts in getting my thoughts
out. I do take pleasure in writing however it just seems like the
first 10 to 15 minutes tend to be wasted just trying to figure out how to
begin. Any ideas or hints? Cheers!

I don't have any specific ways of clearing my head before writing. Sometimes it does take time to get started, but sometimes ideas and phrasing come quickly. The advice I've sometimes been given in creative writing classes in the past is just write anything as a warm-up exercise - anything at all.

Do you mind if I quote a couple of your posts as long as I provide credit and sources back to your website?
My website is in the very same area of interest as yours and
my users would genuinely benefit from some of the information you present here.
Please let me know if this okay with you. Appreciate it!

Yes, you can quote me as long as you credit my blog and give my web address of www.badwitch.co.uk

I am regular visitor, how are you everybody? This piece
of writing posted at this site is really nice.

First off I want to say fantastic blog! I had a quick question that I'd
like to ask if you do not mind. I was interested to find
out how you center yourself and clear your mind before
writing. I have had difficulty clearing my mind in getting my ideas out there.
I do take pleasure in writing however it just seems like the first 10 to
15 minutes are generally lost simply just trying to figure out how to begin. Any ideas or hints?
Cheers!

Hi Thanks for your nice comments. I don't try to clear my mind though - I just think about what I'm going to write, then I write it.