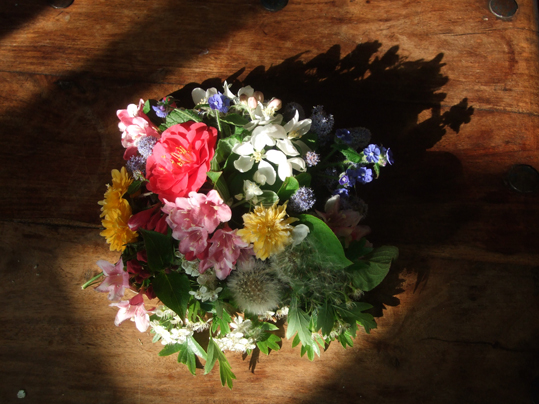 Here is my mandala for the month of April - a bouquet of blossom and wildflowers foraged from overhanging trees and bushes in the streets around where I live in south London, plus a few from my own garden. One of my new year resolutions for 2017 was to create a mandala each month to show the changing seasons, including things growing in my garden, but this is the first month there has been so much flowering there. 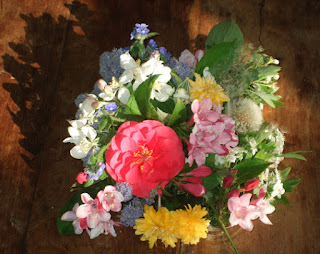 After the cold, dark winter months of January and February when little was growing, let alone in flower, my March mandala showed yellow
blossom of early spring flowers along with symbols for the equinox – eggs, the goddess of rebirth and the hare. But April is when everything in nature is coming to life in the south of England.

Blossom abounds, with a rapid transition from the beautiful pink blossom of the cherry trees at the start of the month to hawthorn and apple at the end. There is also colour everywhere, from the new green leaves on the trees, to the red flowers of the camellia I planted as a gift to my mother many years ago, to the yellow of dandelions, a profusion of bluebells (unlucky to bring into the house) and so many other spring blooms. I tried to show that explosion of colour in my mandala with blooms, leaves and blossom packed so tightly that you cannot see what lies beneath.

The exploded dandelion clocks are there to show how this time seems to pass so quickly, also symbolised by the blossom that last little more than a week on the trees and bushes. I photographed my mandala late last Sunday afternoon, with the sun casting long shadows across my table. That formed part of my mandala too – a beautiful, fleeting, moment captured on camera. The photographs last, but the flowers soon wilted.

I took several photos, from different angles, and asked my friends which pictures they liked best. The three on this post are the ones they picked – which do you prefer? 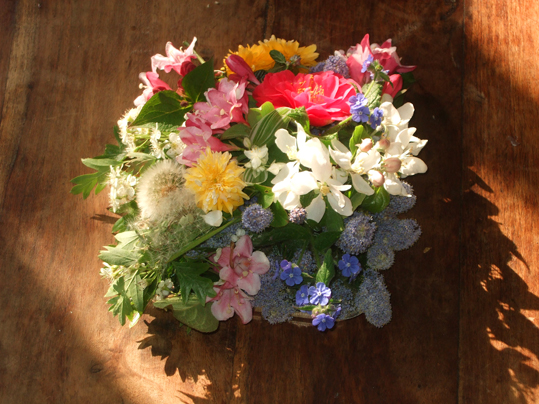