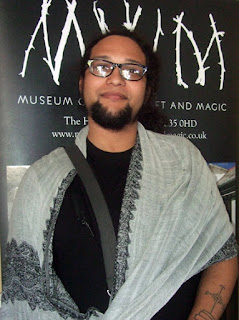 Haitian Vodou cursing was the subject of one of the talks at The Museum of Witchcraft and Magic’s annual conference, Poppets, Pins and Power: The Craft of Cursing, earlier this month.

The talk was by Demetrius Lacroix, an initiate of Haitian Vodou, Brazilian Quimbanda and Santeria, and a specialist on misunderstood cultures. I took a few notes during his talk and I've posted them here:

Vodou is a combination of family traditions from Africa that were brought to the New World. It is about being alive and ways in which people could continue to do their thing in freedom or under oppressive forces.

There is a history of oppression in Haiti. Vodou is the idea that: “No one will oppress me.”

In countries where justice does not exist, another force will take its place, such as magic.

During times of oppression in Haiti, people who lived in the mountains were hard to get to, but if they were caught they would be mutilated and left to die. However, if they got back to the mountains they would have a super connection to magic and to nature. This was the start of secret societies.

All these groups have different relations to spirits that allow them to do certain forms of magic. Forms of cursing that started in these groups then disseminated into public knowledge. Priests of Vodou don’t really do curses - they work with spirits. The use of dolls for cursing is by non-initiated members of the public.

A curse to make someone to die can be one of several things. It could be zombification or could actually make someone die.

Death curses
In the international cemetery in Haiti there are four trees. There are things nailed to these trees and some are curses to make people die. Gede are spirits lost in passage, their names are known. The Mother of Gede is the owner of these four trees. You could have a doll created from fabric or wax and nail it to tree and make an offering, perhaps a chicken; offer it to the Mother of Gede, then come back when the person has died.

Zombification
There are two ideas of zombification. One is to take their spirit if they are dead or if they are alive. The other is someone trapped in their own body.

The soul has many different parts – if you remove the part that makes a person an individual, that makes them a zombie.

Zombification is reserved for serious criminals. They live out their lives providing for the community by working in the fields, but are no longer dangerous. A famous study of zombies was done in The Serpent and the Rainbow, a book by anthropologist Wade Davis.

Haiti is a verbal country, everyone works the land. If you ask a spirit to do something, you have an obligation. Spirits can be bought too. For example, you could buy the soul of someone's grandmother and give them an intention – such as to show up in someone’s dreams.

Trees, earth and fire are very powerful. So, putting an object in a tree or burying it in earth is a very powerful thing to do. Lamps and oil are popular for curses as fire can be seen, but not touched. You can also tie body parts to affect their abilities.

There are ways to reverse a curse. The main one is to attend a party that the spirits attend and they can help you break the curse.

The photo shows Demetrius Lacroix at the conference. I will be typing up more of my notes from talks at the museum's annual conference and posting them on my blog over the next few weeks.