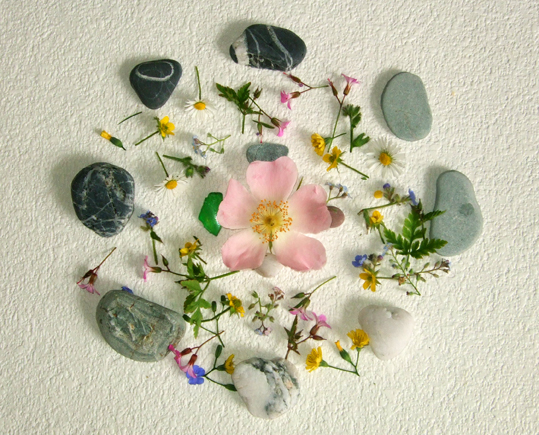 Here is my mandala for the month of May.

One of my resolutions this year was to create a mandala each month to show the changing seasons, including things growing in my garden. This month my garden is a bit of a jungle of wildflowers - partly because I have been away on holiday and for two long weekend breaks and have had little time to weed and prune, but partly because I don't mind flowers growing a bit wild. The bees and butterflies seem to love my overgrown garden too.

In the mandala, flower heads that I picked are scattered pretty much randomly between two circles of stones I collected from the beach by Merlin's Cave, at Tintagel, which I visited while I was in Cornwall. OK, one "stone" is actually a bit of green sea glass, but I couldn't resist using it because of its brilliant green colour.

In the centre is a wild rose. Much larger than the other flowers I chose for this mandala, it is a symbol of love, the Goddess and beauty in nature.

The carefully ordered stones and the disorder of the scattered flowers seemed to me to represent the constantly opposing forces of man's attempt to create ordered structures and nature's way of getting between the cracks and breaking up man-made things. As a pagan, I honour nature, but as a human I am reliant on the buildings we create. Without homes and even cities, we would not be what we are. As a Wiccan, I also recognise the magical energy of all polarities, which can be used to create change in the world - for better or for worse.

In this mandala I celebrate the beauty and power of the wildflowers growing in the cracks between the stones along my garden path and climbing my outside walls - I think they make it a more magical place than it would be if it was neat and ordered.

Great but do you have an Idea about wolf mandala?

Very nice artwork on that website. Thanks for sending the link.

Nice blog but I am looking for how to draw mandala step by step?