New Year Resolutions: Looking Back at my 2017 Plans 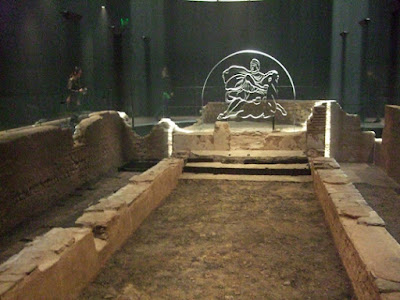 This is the time of year when I look over the resolutions I made 12 months ago and see whether I achieved any of my goals.

Instead of making just one resolution each year, I like to write a list of at least 10 things I want to do. The idea is that with a lot of goals there's a good chance of getting at least some of them done. Here's the list of what I hoped to do in 2017 and how well I succeeded: 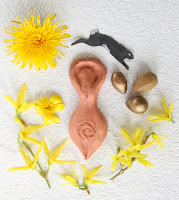 1. Create a mandala for each month representing the changing seasons and including things from my own garden.
This resolution was inspired by the mandala I created and photographed as the cover image for Every Day Magic: A Pagan Book of Days. I really enjoyed doing this every month. The photo to the right shows the one I did in March, which is one of my favourites. Here are links to all of them:

2. Explore more of London on foot and write about aspects of the city I've not yet blogged about
Back in July I explored a route from the book Walking Haunted London and blogged about the haunted church St Botolphs. Also on the walk I photographed the Devils of Cornhill.

3. Visit at least one ancient pagan site that I haven't blogged about before.
While I was on holiday in Cornwall, I visited Men Gurta - or St Breock Longstone - which is Cornwall's largest monolith. Later in the year I visited London's Temple of Mithras just after it re-opened to the public. At the top of this post you can see a photo I took at the temple.

5. Do something to raise money for a charity
Although I didn't blog about it this year, I did run a fundraiser for the NSPCC Big Board Game Day. I like playing board games and this annual event is a great way to get together with friends to do something fun and also raise money for a good cause. I previously took part in the Big Board Game Day in 2015.

7. Learn the basics of blacksmithing in order to make my own athame
This is another thing I didn't find time to do it in 2017, but still hope to do some time.

Oracle TV's presenter Carrie interviewed me for a Halloween Special video, which is up on YouTube. I blogged about it on October 31 and you can watch the video here: https://youtu.be/UTxVu8UGhGs

I think achieving 7 out of the 10 goals I set myself this year is pretty good - and I also enjoyed doing every single one of those things. I'm now going to start thinking of 10 things I want to do in 2018.