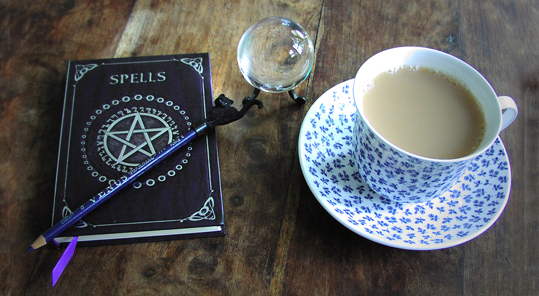 I hope you had a wonderful New Year's Eve and are looking forward to a bright start to 2018, whether you choose to plan for the months ahead or just go with the flow.

Personally, I like to make new year resolutions - and here are mine for 2018. Rather than just making a single resolution, I make a list of at least 10 things I want to achieve over the year. I find that if I write a list of several things I have a good chance of succeeding in at least some of them. In 2017 I did seven of the 10 things I hoped to do - which is about the number I usually achieve. I don't think I've ever scored 10 out of 10, but that's okay.

My list for 2018 includes some continuations of things I've been doing already, some things I failed to do last year or the year before and a few new projects I'm keen to try out. Here they are:

The photo at the top was taken in my witch room and shows one of my crystal balls, a lovely notebook that says "spells" on the front, a pencil topped with a fuzzy black cat and a very large cup of tea.