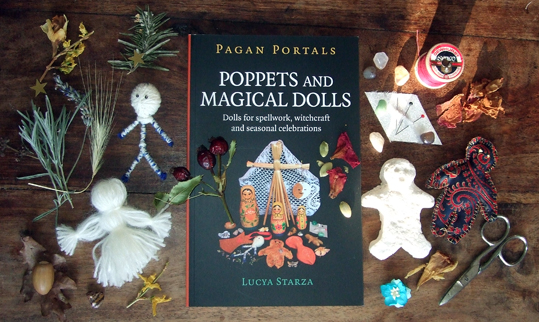 Today is the big day! My new book, Pagan Portals - Poppets and Magical Dolls is now officially published. That means if you pre-ordered a copy from Amazon in the UK, it should be sent out to you. I think Amazon in the US sends books out slightly earlier than over here, so if you live in the States it is just about possible you have already got one if you ordered it. 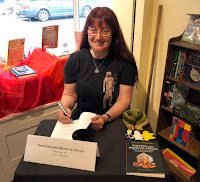 A few copies went on sale early at independent pagan bookshop Treadwell's, at 33 Store Street, Central London, when I did an early book signing there in July. The shop should have more in stock soon if it hasn't got them already. The large chains Barnes and Noble and Waterstones will also have it available to order on their sites and in store.

On Saturday 8 September at 2pm, I will be reading from Pagan Portals - Poppets and Magical Dolls at Wicca Moon, 50 Well Hall Road, London SE9 6SH. There will be some on sale there then, if not before. For further details contact Shirlee@wiccamoon.org.uk, call 0208 850 7803 or visit www.facebook.com/WiccaMoonEltham/

You can view Pagan Portals - Poppets and Magical Dolls on Amazon and also order it via publisher Moon Books' website.

Over the past few months I've been blogging about magical dolls and poppet-making. Here are a few links to some of those posts:
Magical Dolls: A Poppet I Made to Help Me Write
Magical Dolls: How to Make a Knotted Wool Poppet
Magical Dolls: Egyptian Paddle Dolls for Fertility
Magical Dolls: Healing Kundu at the Horniman Museum
Potato Dream, Night Cramps and Poppet Making

Congrats! US fan here. So happy for you. Can't wait to get my book.