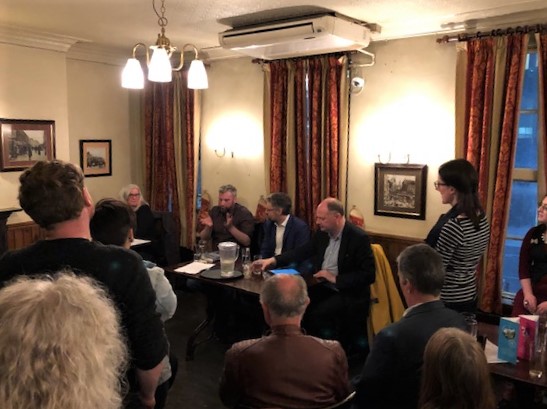 The pub was packed with people who have followed Bob and Rich into the Grey Soul and Thin Veil of London and on to the Pantheon of Pancras. The pair read stories from London Baroque and talked about the origins of Minimum Labyrinth, which started when they decided to explore Peter Ackroyd's London and areas mentioned in Arthur Machen's horror fiction.

Bob sent an email around after the party which said: "If you made it to the Hoop and Grapes then I hope you had as much fun as we did. It was so lovely to see so many of you there - it really does feel like over the years we have become a little community, bonded by a love of the streets of London and the uncanny things to be found there."

If you want to go on Minimum Labyrinth's walks and talks, here are the details of ones coming up:

The Lost Gods of London
Bob will be talking about Pagan London, along with a screening of the films, at South East London Folklore Society on Thursday 11 April. Selfs meets at The Old King's Head on Borough High
Street, near London Bridge station, at 8pm each month.

The Pantheon of Pancras
This walk will be run on 1 June and and 9 June. You can read my review here.

All details are at www.minimumlabyrinth.org.