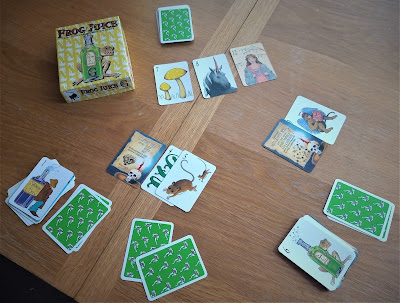 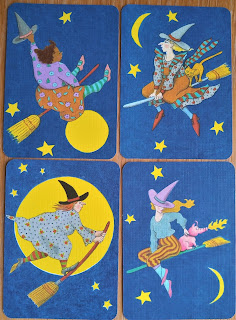 I've been playing a lot of games while stuck indoors recently - and I've been blogging about some that have magical or witchy themes.  Frog Juice is a card game about witches, spells and potion-making that sat on my shelf unplayed for many years, even though I love the theme and the artwork.

The reason was that although the rules looked as though they should be easy - printed on a single sheet of A4 paper - they weren't explained that clearly. Yesterday, looking for something new to play, I dug out Frog Juice and discovered that a better edition of the rules could be found on boardgamegeek. And yes, it is actually simple easy to play.

Players compete to get the most spell ingredients and special power cards. You can do that by capturing cards from a centre row, asking opponents for ingredients you need for specific spells, or playing them from your hand. The one with the most points at the end wins.

A mechanic of the game is that you capture cards from the centre line by revealing cards from your hand that add up to the same number that's printed on the top. This does make you exercise your quick mental addition skills, so I guess the game was probably intended to be partly educational. It is suitable for those aged eight and over, according to the box lid.

It is a fun game, and only takes about 25 minutes to play, but I will admit that what I like most about it is the artwork - particularly those jolly looking witches on their broomsticks.

You can view Frog Juice on Amazon. It is published by Gamewright, but is currently out of print and now quite rare.

I would like to thank you for the efforts you have made in writing this article. I am hoping the same best work from you in the future as well. In fact your creative writing abilities has inspired me to start my own Blog Engine blog now. Really the blogging is spreading its wings rapidly. Your write up is a fine example of it. solitaire card games free