Spring Mandala: Jill in the Green from Garden Flowers 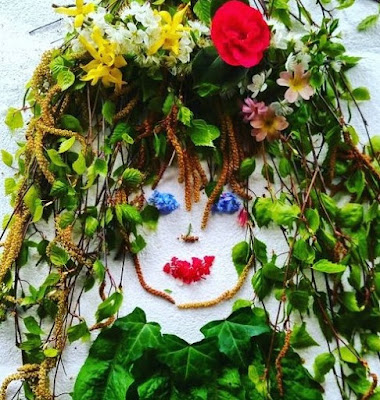 The sun was shining and my garden is full of greenery and blossom, so I went out and collected leaves and flowers to make a spring mandala. The picture shows what I created - a Jill in the Green. I supposed technically speaking this is a floral artwork rather than a traditional mandala, but it was what I felt inspired to do.Earlier this year I decided to repeat a project I did back in 2017,when I made a mandala each month using flowers and other found objects, inspired by the book I edited, Every Day Magic - A Pagan Book of Days.
Back in January, I created a winter mandala. Although I managed to find evergreens and colourful rosehips and berries, in April springtime I was spoiled for choice! Meditating on my artwork later, I felt this lady of flowers was a real sign of life returning to the land, of hope for the future, and of sunny days and meeting friends out in parks and gardens once more!

Creating a mandala each month, or each season, from things found in nature is a meditation on what is happening in the Wheel of the Year, but also a reflection on our own feelings and how they change. Each year has a pattern of similarities, but is never quite the same. In 2017, two of my mandalas were also faces. In January 2017 I created a wintery self-portrait, with sparse twigs, while I made a Green Man for the Autumn Equinox in September 2017. My mandala for April 2017 was a bouquet that seemed to represent how nature changes so fast in spring and how time rushes on. Make the most of each moment!

Jack in the Greens and Jill in the Greens are often created as part of May Day festivities, and I'll be talking about Magic for the Month of May in a free Facebook Live event on Friday 7th May at 4pm. You can watch it after that too, as the video will remain available. Here's the link and details: https://www.facebook.com/events/744767222850385/