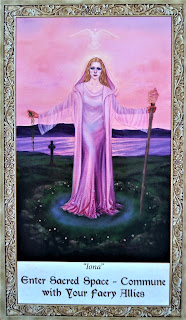 Every month, both this year and last, I've been drawing a tarot or oracle card as a reading for the world. The divination for this month came from the Art Through the Eyes of the Soul Oracle and showed a picture of the ancient Scottish Isle of Iona, with the message "Enter Sacred Space - Commune with your Faery Allies."

I must admit I was a bit unsure about this card when I first drew it, because the subject of fairies can be  divisive. Historically, fairies were seen as dangerous, and often not exactly allies. The view of them as helpful little nature spirits only developed in Victorian times. The picture on the card shows a divine woman standing inside a circle formed by Fairy Ring Champignon mushrooms. I confess I've personally stood inside such rings myself with no ill effect. However, one should probably avoid doing so. Partly that's because squashing the ground might hinder future growth of the shrooms, but there's also reputedly a risk of getting whisked off to fairyland and lost for 100 years.

The book that comes with the set gives an expanded meaning: "Approach the dwellings of faeries and ancestors with reverence and respect. Interdimensional contact is both natural and illuminating." That's a message I can get behind. We are at the start of summer, and many pagans and others will be considering travelling to sacred sites. We should all remember to tread lightly as we go, avoid damaging places of natural beauty, treat those who dwell there with respect, and act in a manner that is responsible. You are more likely to get help from otherworldly beings if you treat their spaces well.

I have never visited Iona, but it is somewhere I would love to go. The island is associated with the Goddess Brigid, among other revered beings, and has a water source that is known as the Well of Eternal Youth.

You can view the Art Through the Eyes of the Soul Oracle on Amazon.