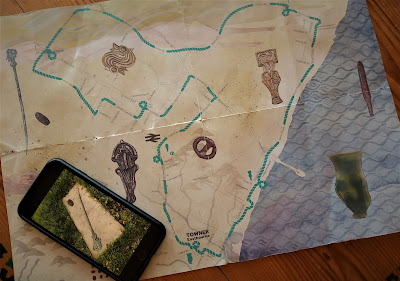 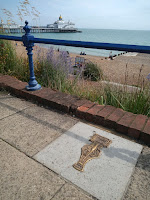 Who could resist a hunt for ancient treasure after being handed a map showing where it's hidden? I certainly couldn't, and that's what I did on my holiday last week. So, Walking Through the Town I Followed a Pattern on the Pavement that Became the Magnified Silhouette of a Woman's Profile. That's got initial capitals because it's the title of the art project behind it all.

I love walking art as much as treasure hunts. This one was devised by artist Mariana Castillo Deball for the Towner gallery in Eastbourne as a collection of ways to explore the Sussex landscape. There's an exhibition of pictures, words and maps curated by Mariana at the gallery, the urban walk, and another walk over the cliffs to a newly created giant chalk drawing.

The exhibition, called A Drawing, a Story, and a Poem go for a Walk, was the first thing I visited. You can see a photo I took there, of an old map of Eastbourne. It was where I was handed the new map you can see in the photo at the top of the post.

Two hours is supposed to be the time you need for the town walk. You could probably do it in that time if you are fast, don't stop for breaks, and don't struggle to find the objects marked along the way. It took me half a day and I still failed to find two things.

The treasures to hunt for are sculptural objects embedded in the pavement and grass verges. Each plaque contains a scaled-up replica of grave goods buried with the Frankish Woman, whose ancient remains were discovered in the Anglo-Saxon cemetery on St Anne’s Hill. 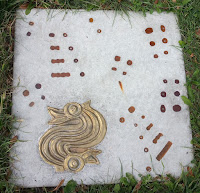 You aren't meant to dig up the artworks of course, but I think possibly someone did. There are supposed to be six plaques. I found four. You can see one in the photo on the phone at the top of this post, and others to the left. I searched really hard for all of them, but failed to find one that's supposed to be directly outside the Towner, and the one by Beamsley Rd. If  anyone reading this has found them - please leave a comment and, if possible send me a photo!

But the map is more than just a guide to finding art inspired by heritage - it uses the outlines of streets to form the shape of a woman in the landscape. It seemed to me to be about the interplay between people and the environment, the stories of our history. We change the land we live in, and we become the land we are buried in. The landscape is a human landscape as much as it is geological. The emphasis here also is on women. So much walking art is done by men, and so much history focusses on men. This redresses the balance to show the feminine in the land, and in the past. However, the walk can be different things to different people. Mariana said it “can be experienced as an image, a walking path or a narrative.”

The third part of the work is a giant chalk depiction of a hairpin, which is also shown on one of the plaques. You can find it by walking up the cliff path along Foyle Way, at the start of the South Downs, to Whitbread Hollow. It is a steep climb in places, so wear sensible shoes, but the view on the way is beautiful.

You can find out more about all of these things at the Towner Eastbourne website: https://www.townereastbourne.org.uk/

I love that Mariana has devised this walk. I do hope the missing pieces are found.

I hope I was just looking in the wrong places! Mind you, one of them might have been hidden underneath a pop-up cafe on some grass outside the gallery. I will look again when the cafe goes.