Divining with Natural Objects on a January Beach Walk 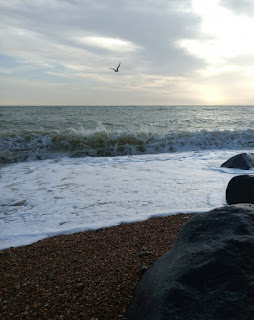 On New Year's Day I went for a walk along a beach. It's a beach I often visit, but particularly on New Year's Day ever since I found a book on Celtic Mythology just lying there one cold and misty January morning over a decade ago. Every year since, when I've been able to, I've visited the beach to look for signs and portents to guide me on my path. I've never found anything quite as odd as that book, but even natural objects can be used as a form of divination.

I look for things that particularly catch my eye and spark my curiosity, using my intuition to work out what they might mean. On January 1st this year I found a curious pebble. It had a golden centre surrounded by blacker stone. You can see it pictured below on this post. It looked to me like seeing the light at the end of the tunnel, and made me feel that this year we will at least start to see better things ahead.

Now, I realise you aren't supposed to remove stones from beaches. Although most councils turn a blind eye to people who just take one or two, it isn't great to reduce the sea defences. So, I don't permanently remove stones or shells. I take them back later. Another of my New Year customs is to return shells and pebbles I've borrowed in the past year. Before finding my new stone, I threw a handful of shells back into the waves, thanking the Goddess for them and asking for a new sign of things to come. I also try to do a bit of a beach clean, removing plastic and any other man-made rubbish I see.

You don't have to go to a beach to scry or divine with natural objects. A wood or even a park near where you live will do just as well. Go for a walk and be aware of the things you see - plants, twigs, stones or even wildlife. If it's something that really shouldn't be removed, just take a photo to contemplate in days ahead.

My book Pagan Portals - Scrying has more about divination with crystals, water, clouds and trees and is available from Treadwell's bookshop already. It's officially published in Februry 2022.

While sieving the contents of the leaf bin a few weeks ago, I found lots of bits of flint that looked like they'd been knapped, or chipped off of something bigger. Some actually looked like part-made arrow heads and blades. I've learned since that some of these are called Levallois flakes. I've kept them all to use for divining, though I'm not sure how just yet, other than very basic psychometry. I only put leaves in the bin, so I wonder how all these flinty bits get there. I also found a very old looking animal pelvis and a calcified bone, and very little else. All sorts of rubbish turns up in the compost bins, so why is all this interesting stuff only in the leaf bin?