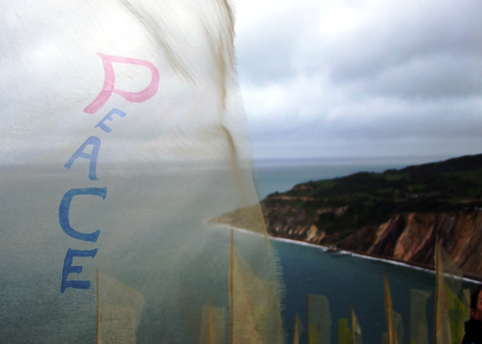 After I blogged about Soul Seeker, a new travel and alternative health TV series due to be broadcast on Travel Channel (Sky 251) from April 8th to 12th, the company producing the programme kindly sent me a preview DVD to review.

The episode of Soul Seeker I was sent was one about the Isle of Wight, in which presenter Jo Sinnott tries out all sorts of outdoors health and fitness activities. She stays at a holiday centre described as "an evolutionary fitness bootcamp" where raw food is on the menu and everyone spends as much time in the natural environment as possible. The episode's title is A Life Lived Wild and activities Jo takes part in include foraging for food, tree climbing, swimming in the sea, barefoot running and weight-lifting using stones on the beach.

I'm going to be honest, although I could admire the fit and enthusiastic people for taking part in such activities - and they did seem to be enjoying themselves - I'm not entirely sure that I'd want to spend an entire holiday doing that kind of thing myself. I've had some fantastic holidays on the Isle of Wight - and I do love country walks, paddling in the sea and enjoying the beautiful scenery there. But I'm guess I'm just not that much of a health fanatic.

As well as physical activities, Jo meets a resident who makes natural tree essences and sees a beautiful art project  in which dozens of flags have been placed on a clifftop with messages of peace.

Unfortunately, I don't get the Travel Channel (Sky 251) on my Freeview TV package, otherwise I would definitely watch the rest of the episodes in Soul Seeker. They cover India, the Greek island of Skyros and China and cover various holidays with a mind, body, spirit theme.